Robin Thicke and Paula Patton’s split was pretty shocking, but Thicke said it has inspired some of the best music of his life. 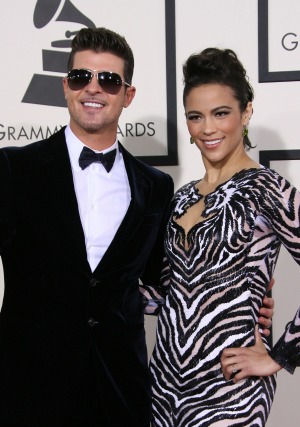 Robin Thicke wasn’t shy about publicly attempting to get his wife Paula Patton back after they announced their split, and now he is opening up about that fight.

5 Reasons the Thicke/Patton split was inevitable >>

The “Blurred Lines” singer was on tour when Patton announced the couple was parting ways, and he reportedly canceled his next few dates to try to win his wife back. Thicke finally opened up about that move to People, and why he felt his music was the best way to express to his wife how he feels about her.

“My music is very honest about what I’m going through and my songs are about my life,” he said. “And my relationship with her was 21 years of my life, so I just thought it was important to me to let people know how much she means to me.”

Patton hasn’t opened up about those messages, at least not publicly, but Thicke said she did appreciate them.

“She loved it,” he explained. “She thought it was the sweetest thing and very romantic, and I’ve always been a romantic guy that way.”

When asked if the couple would be getting back together, Thicke seemed to sidestep the question, and said they’re doing much better — although wasn’t clear if that was together or alone.

“We’re both doing well. We’re both very happy right now — much happier,” he said. “Everything about this moment in my life — this amazing year I just had and what I’m going through personally — has actually ignited some of the best writing I’ve done in a long time.”

That writing will be heard in his new music, and the singer didn’t miss the opportunity to promote his next album.

“Whatever everybody’s wondering about, they’re going to hear it all in the album,” he said, adding that his goal for the rest of the year is to “be a great father… and be a great friend to Paula.”