Lagertha is back. How will our Vikings react? Her return could prove to be the undoing of Rollo and Siggy. Will it also put Rollo and Ragnar’s brotherly love in jeopardy (again)? 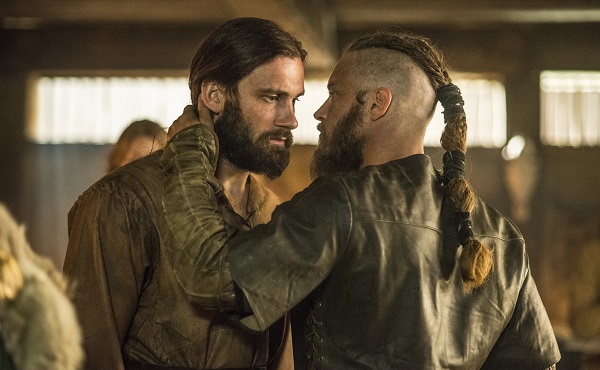 INTERVIEW: Vikings explores polygamy and the “other woman” complex >>

Rollo has really come into his own this season and that has never been more obvious than when he was charged with protecting his brother Ragnar’s family last week. His impulses have often gotten him in trouble. When Season 2 started, the brother were more enemies than friends… especially after Rollo went after Ragnar’s BFF, Floki. Ragnar paid for Rollo’s forgiveness in the matter and since then he’s continued to grow, all while being mostly shunned by Kattegat.

When Jarl Borg showed up last week, Rollo (Clive Standen) was poised for a fight to the death to defend Kattegat. However, for once, Rollo’s conscience got the better of him and he reeled in his impulses, retreating to the mountains with Ragnar’s heirs. What will happen this week, though?

Lagertha (Katheryn Winnick) has returned with Bjorn as a full-grown (and strapping) man and soldiers from her new husband’s town. While she’ll have to contend with her first love’s new marriage to Aslaug, she’ll also put another pairing on the line. Rollo’s lust for Lagertha is no secret. In the first season, we saw him try to get to her and fail. On the one hand, Lagertha is married to someone new… albeit unhappily. She undoubtedly still loves Ragnar, too. On the other hand, if she can’t have her first love, will she settle for Rollo? We certainly would. But, we’re not fierce and fiery shield maidens. From the looks of this exclusive clip, Lagertha can have him, if she wants him. But what will happen to Siggy in the process?

What will happen if Rollo decides to take his chances, again, and goes after Lagertha? Will Siggy be left high and dry? If Rollo reacts to his impulses yet again, could he also further jeopardize his relationship with his brother Ragnar? The Vikings saga continues Thursday, March 27, on History at 10/9c.

Want more TV news and exclusives? Sign up for our newsletter >>