It appears the time Amanda Bynes has spent away from the public eye has done her a world of good. The once troubled star revealed pictures on Twitter recently that show her looking like a new person. 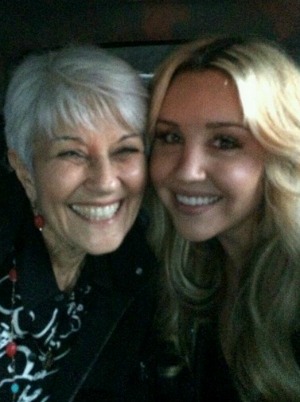 Amanda Bynes is clearly a much happier and healthier person now than she was last year. The whole world watched as the star suffered from a public breakdown that included a string of bizarre antics, such as pouring gasoline on her pet pooch, throwing a bong out of the window, calling almost everyone ugly via Twitter and trying to set fire to a stranger’s driveway!

However, it appears the time the Easy A actress spent in The Canyon Treatment Center in Malibu, California, along with the continued love and support from her parents, has helped her deal with whatever emotional turmoil she had been going through at the time. And now the star’s Twitter page reflects a much happier person.

Gone are the strange blue wigs and raunchy selfies from Bynes’ account. She has deleted all those crazy tweets and replaced them with pictures of her new sketches and lovely snapshots from the Fashion Institute of Design and Merchandising Debut Runway Show held in Santa Monica, California, on Friday.

The photos from the FIDM event show Bynes with her parents Rick and Lynn, and she’s looking beautiful, healthy and dare we say normal.

Bynes is a fashion student at FIDM, and she appears to be making a fresh start and leaving her troubled past behind her. We’re very happy to see that Bynes has reconnected with her family, and their love and support have no doubt been what she needed on her road to recovery.