Carson Daly is a self-proclaimed family man, and luckily for him, his own family is about to get a little bigger. The Voice host has revealed that his fiancée is pregnant with their third child. 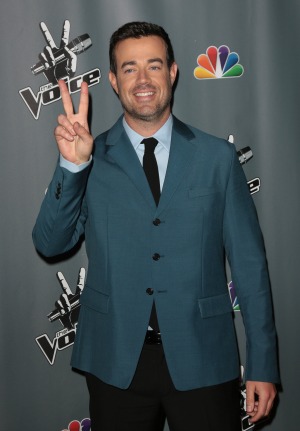 Carson Daly has a lot of positives in his life right now. He’s the host of the hit reality TV show The Voice, a Today Show correspondent and he’s about to be a dad for the third time!

The television personality revealed the happy news that his fiancée Siri Pinter is once again pregnant during his appearance on The Tonight Show Starring Jimmy Fallon on Monday.

The happy couple have already been together for more than six years, and although they may have taken their time to get engaged, they have certainly wasted no time on adding to their little family, which consists of children Jack, 5, and daughter Etta Jones, 19 months.

Daly even confessed to People magazine in January that he was a family man, saying the couple want “as many kids as God blesses us with.”

So is food blogger Pinter excited to have another bun in the oven already? The brunette foodie took to her blog on Tuesday to announce her happy news and a killer recipe for Double Chocolate Double Peanut Butter Cookies.

“The more exciting news is… I’m pregnant!” she wrote.

“Carson and I are expecting our third child in mid-August and he, Jack, Etta and I are so happy. Well, as far as I can tell Etta is happy (she thinks the baby lives in my breasts),” she added.

Pinter went on to tell fans that she is already halfway through her pregnancy.

“I’m about halfway there, feeling pretty great, and eating enough for 5. Is that how it works? Are you supposed to eat for every member of your family, including the baby in your belly? Just say yes and make me feel better about life.”