Are Leah and Shane leaving Grey Sloan Memorial Hospital at the end of Grey’s Anatomy Season 10? It sounds like it. 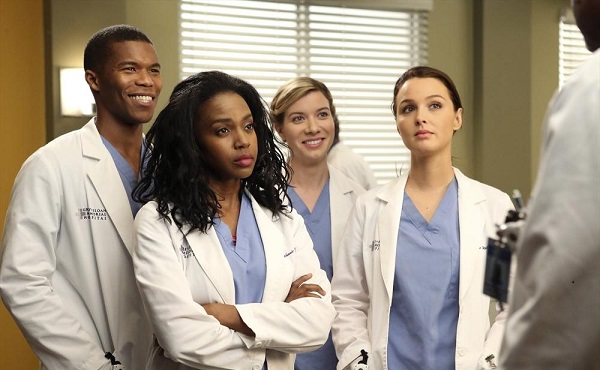 Uh-oh! The Hollywood Reporter has a source claiming that Shane (Gaius Charles) and Leah (Tessa Ferrer) won’t return for the still-unannounced eleventh season of Grey’s Anatomy. According to the source, they’ll exit at some point during the remainder of Season 10.

8 Characters who have been killed off on Grey’s >>

This news hasn’t been confirmed by either actor, however. Charles is an avid Twitter user and, while his account has been quiet as of late, he has neither confirmed nor denied the rumors. Is he quiet because he’s busy, or because he’s licking his wounds over his loss of a steady job? Only time will tell.

Charles and Ferrer’s characters are both dealing with difficulties within the hospital. Ferrer’s character, Leah, has filed a complaint with the hospital, claiming it’s a hostile work environment. She created the situation after sleeping with Arizona while Arizona and Callie were on a break. It probably is in Leah’s best interest to start fresh at a different hospital.

Charles’ character, Shane, has gone through his own struggles, too. First, a lack of sleep caused him to flub a major surgery and land himself in serious hot water. His on-call room trysts with Dr. Yang also earned him some chastising. However, in recent episodes, it seemed as though Shane was redeeming himself in the eyes of his mentors and bosses. Yang was even being more sensitive to the situation and has been trying to be a better mentor. We’d love to see this “shark” stay, especially since we know Yang (Sandra Oh) will leave at the end of the season.

Grey’s is on the list! Best places to find shirtless men on TV >>

This could all be a moot point, though. ABC has yet to officially announce a renewal for Grey’s Anatomy. It’s entirely possible the show might not return. However, we do know that both Patrick Dempsey (Derek Shepherd) and Ellen Pompeo (Meredith Grey) signed on for an additional two seasons, meaning there are/were plans to carry the show through to a twelfth season.

How much longer will we enjoy Grey’s Anatomy and will Shane or Leah be there when/if the show returns? It looks like it’s a waiting game for now.