What happened to Malaysia Airlines Flight 370? Our timeline breaks down all the new developments as they happen — plus a few conspiracy theories. 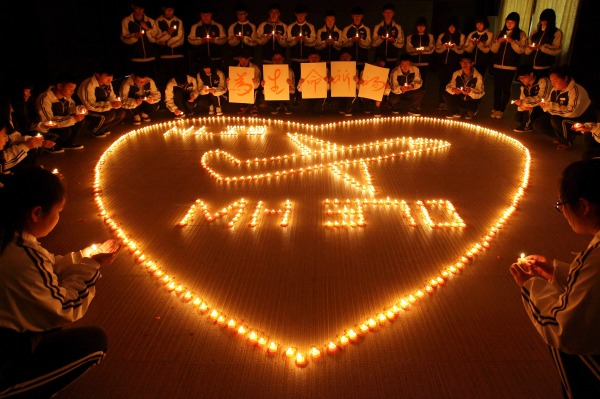 Malaysia Airlines Flight 370 (also known as MH370) takes off from Kuala Lumpur with 239 people aboard, scheduled to arrive in Bejing in just under six hours. The plane disappears from Malaysian radar two hours into the flight. The airline keeps the flight’s status as “delayed” long after the flight should have landed.

Two passengers are revealed to be traveling on stolen passports. Reports begin that the plane may have tried to turn back toward Kuala Lumpur. Two oil slicks are spotted in the South China Sea, but are later determined to be unrelated to the missing flight.

Final verbal transmission from the cockpit is released to the media: “All right, goodnight.” It is unclear if the words were spoken by the pilot, the copilot or another male who may have breached the cockpit.

The Chinese government releases satellite images of possible debris, from a suspected crash site in the Gulf of Thailand, which is never found.

Satellite data shows that MH370 flew for at least seven hours after the communications systems were deliberately shut down. Police search the homes of the pilot and the copilot.

Reports state that the flight path was altered by hand with a series of turns programmed in before the final crew communication. Australia begins a search of the southern Indian Ocean.

Possible debris is spotted approximately 1,400 miles from Perth, Australia. The Aussies send four P-3 Orion surveillance planes and an RAAF helicopter, while New Zealand and the U.S. add power to the search.

The Malaysian government tells families of the passengers and crew — some via text message — as well as the press that they are sure MH370 crashed into the southern Indian Ocean and all lives were lost, despite no debris being found. Malaysia Airlines announces they are giving families of the victims $5,000 to cover immediate expenses, with more money forthcoming, and will handle all travel to Australia. Outraged families demand more answers and some stage a demonstration outside the Malaysian embassy in Beijing. Ten Chinese and six Malaysian ships alone, with three additional helicopters, are expected to arrive in the search area by Tuesday.

The search is temporarily suspended due to poor weather conditions.

Malaysian officials announce that French satellites have spotted at least 122 pieces of potential debris from MH370 ranging in size from 3 to 72 feet in the southern Indian Ocean, spread over an area of 154 square miles.

The search area is moved 680 miles to the northeast of where previous efforts were focused after new calculations and satellite images point to a possible new debris field.

Sources tell CNN that an FBI investigation of the deleted files on the pilot’s home flight simulator turned up nothing unusual.

With still no sign of the missing plane and all possible debris fields coming up empty, searchers deploy submerged pinger locators before the 30-day battery on the black box runs out. The battery supply runs out on Monday, April 7.

Searchers confirm they have picked up several pings consistent with the signals sent out by a flight data recorder — but the signal is getting weaker.

What do you think happened to MH370?