Chris Hemsworth and Elsa Pataky welcomed their two new boys last week, and decided to introduce them to the world through Instagram. 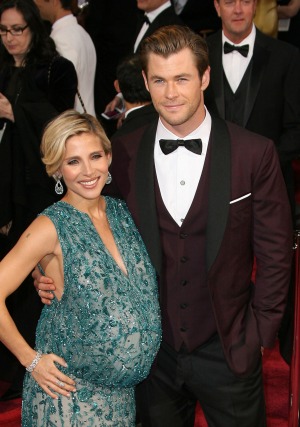 Chris Hemsworth and Elsa Pataky are now the parents of three young children. Only a week after giving birth to twin boys, Pataky has revealed the names of her and Hemsworth’s two newborns, as well as a photo, on Instagram.

Will Chris and Liam Hemsworth share the big screen? >>

Hemsworth, 30, and Pataky, 37, are already parents to daughter India Rose, who is now 22 months old. They announced their second pregnancy in November 2013, and confirmed there would be two new members of their family only two months ago.

The photo showed the boys’ feet, and was written in Pataky’s native Spanish. Translated, it said, “They are already home. Tristan and Sasha arrived in this world 18 March just after the full moon. Complete happiness!!”

Pataky blogs for Spanish Glamour and recently wrote, “Enjoy every second with your baby because it is the most wonderful thing [in] the world.” The parents seem to be doing just that, although Hemsworth is currently in the middle of filming The Avengers: Age of Ultron.

“It makes it harder to leave and go to work,” he recently told E! News. “I enjoy being at home a lot more than I ever have.”

There is no word on what the names Sasha or Tristan might mean to the couple, but both parents are obviously over the moon with the newest members of their family. After announcing their newest pregnancy, Hemsworth spoke with Parade magazine about what it means to him to be a parent.

“I think [parenthood] brings out the child in all of us,” Hemsworth said. “That’s what’s so beautiful. It reminds you of the fascination you had with things and how you can spend hours just being with someone. It’s amazing.”