Pharrell and his Smokey the Bear hat have thrown their support behind a presidential possibility who hasn’t even officially decided to run yet: Hillary Clinton. 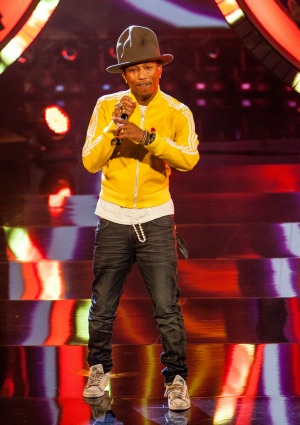 Hillary Clinton in 2016? If the former first lady and Secretary of State ever officially decides to take another stab at running for president, she has at least one powerful celeb behind her: Pharrell and his fabulous hat.

“Let me tell you why Hillary’s going to win,” the “Happy” singer told GQ. “Everywhere you go in this country, you have red and blue. You got the Democrats; you got the Republicans. You got the Bloods; you got the Crips. Everything is red and blue in this country. You know what else is red and blue? Blood. Blood is blue in your body until air hits it, and then it turns red. That means there’s unity. There’s gonna be unity. So when you think about a night where there’s late-night talk-show hosts and it’s mostly women, that’s a different world. Right? A world where 75 percent of the prime ministers and the presidents were women: that’s a different world. That’s gonna happen, and it’s gonna happen when Hillary wins.

VIDEO: Pharrell talks to SheKnows about working on the music for the Academy Awards >>

“No matter how staunch of a supporter you are of no-abortion, whatever you are: You’re a woman, and there’s no way in the world you’re going to vote for somebody that’s going to try to tell you what to do with your body,” Pharrell said. “When we are a country and we are a species that has had a Martian rover traveling up and down the crevices of this planet looking for water and ice, OK, and we’ve had a space station that’s been orbiting our planet for 16 years — but we still got legislation trying to tell women what to do with their bodies? Hillary’s gonna win. Listen, I’m reaching out to her right now. She’s gonna win.”

While Clinton is deciding whether or not to run, Pharrell is keeping busy promoting his new album Girl. See him next on Saturday Night Live April 5.