Jessica Simpson looks amazingly slim in Daisy Dukes shortly after the birth of her second baby. 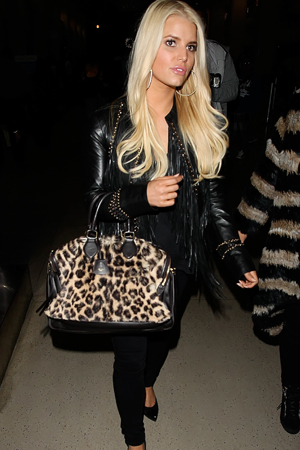 Jessica Simpson flaunted svelte legs in Daisy Dukes after her second baby, looking just as she did almost 10 years ago.

The actress and Weight Watchers spokesperson stepped out in Calabasas on Sunday, wearing short shorts that showed off her newly toned and slim legs, The Daily Mail reported. Simpson appeared exactly as when she wore Daisy Dukes for her famous role in the Dukes of Hazard movie in 2005.

No Italian wedding for Jessica Simpson — what happened? >>

After a long struggle with weight issues, Simpson was finally able to reach her goal on March 6, showing off the results in a series of Instagram photos. The now-svelte fashion maven was out on a lunch date when she donned her leg-revealing shorts paired with a baggy button-down shirt over a white T-shirt. To complete her movie role-worthy look, Simpson wore high platform wedges and large sunglasses.

While Simpson easily shed 10 pounds for Dukes of Hazard, she has had problems with fluctuating weight ever since. During her first pregnancy with her daughter Maxwell, the former singer gained 50 pounds. She had a hard time losing it, and signed up with Weight Watchers to represent the brand as a celebrity.

However, when pregnant with her second baby, Ace, she obviously had to stop her weight-loss efforts. But Simpson vowed to stay healthier this time around, and was able to shed the baby weight in a short time, getting in the best shape she has been in for a long time.

The 33-year-old mother of two approached weight loss differently and set out to take it “week by week” to avoid getting flustered if goals weren’t met.

“If I had a long-term goal, and that’s all I thought about, I think it would set me back more,” Simpson told the Mail in October. “So I really, every week, try to make sure I stick with my points and get four workouts in. That’s my goal this week and I hope that I can lose from that.”