Officials says Malaysia Airlines MH370 went down somewhere in the southern Indian Ocean — but families of the lost passengers aren’t buying it. 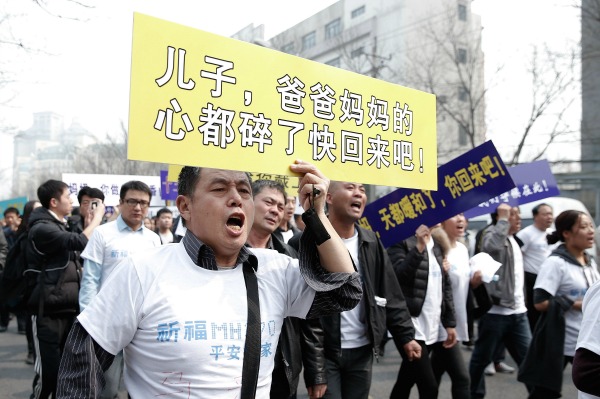 Authorities searching for the missing flight MH370 have determined the jet took a southern route and all lives have been lost.

Based on radar and mathematical calculations by Immarsat and the U.K.’s Air Accidents Investigation Branch, officials were able to determine if the plane was flying towards or away from a satellite location.

“If you sit at a train station and you listen to the train whistle, the pitch of the whistle changes as it moves past. That’s exactly what we have,” explained CNN Meteorologist Chad Myers. “It’s the Doppler effect that they’re using on this ping or handshake back from the airplane. They know by nanoseconds whether that signal was compressed a little — or expanded — by whether the plane was moving closer or away from 64.5 degrees — which is the latitude of the orbiting satellite.”

Using this information, officials determined that the plane went south towards the southern Indian Ocean and ended in the area where debris has been spotted. However, nothing belonging to the plane or its passengers has been found.

Malaysia Airlines has offered the families of the missing passengers an initial $5000 in compensation and travel to Australia, closer to where the search is being conducted. Additional compensation is being prepared, they said.

But the families are angry with the way the investigation is being handled and want proof that the plane actually went down. A crowd demonstrated outside the Malaysian embassy in China yesterday in direct conflict with the country’s ban on protests, demanding the truth.

A representative for the families issued a statement this morning calling for more information from Malaysian officials who “have concealed, delayed and hid the truth from the relatives and peoples of the world. This despicable act, aimed to fool the relatives of the 154 Chinese passengers, [has] devastated us physically and mentally.

There were 239 people total on board the ill-fated plane.

Whatever answers are out there, they won’t come today — Australian officials called off the search for the day due to harsh weather conditions.