The first lady Michelle Obama and her daughters have traveled to China for their first-ever goodwill trip, and the first daughters are looking more grown up and glamorous than ever. 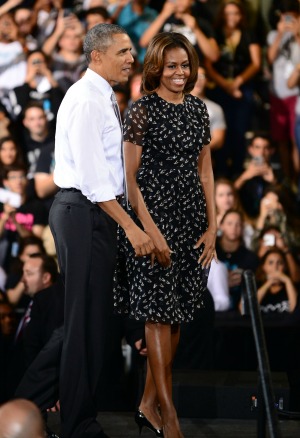 The first daughters were spotted with their mother Michelle Obama and grandmother Marian Robinson on their first-ever trip to China recently as they experienced all the country has to offer during a seven-day, three-city goodwill tour.

According to Us Weekly, the first lady made a moving speech on Saturday at the Stanford Center at Peking University in Beijing where she discussed her stance on media freedom in China. She said, “It is so important for information and ideas to flow freely over the Internet … because that’s how we discover the truth.”

And the photos that have emerged from the first family’s trip are absolutely gorgeous. The Obama women were photographed in Beijing on Friday, March 21, alongside Chinese President Xi Jinping and China’s first lady Peng Liyuan.

According to the publication, Sasha, 12, has a wardrobe every bit as feminine as her mother’s and wore a long-sleeved cherry dress for her picture with China’s president whilst her older sister Malia, 15, boasted the trendiest wardrobe of all. Malia wore a high-waisted floral skirt with a matching crop top, an ensemble that was both stylish and classy.

Michelle Obama has also once again proven how tech-savvy she is and has chosen to document her trip to China via her Instagram account. FLOTUS’ account shows pictures of the family’s travels, including their trip to the Mutianyu section of the Great Wall of China on Monday while exploring the Forbidden City, and Mrs. Obama even expressed her fun side when she danced alongside traditional Chinese performers.

It may have been the first family’s first-ever trip to China, but we’re sure they made a lasting impression. The Obama ladies are scheduled to reunite with President Barack Obama on Wednesday in Washington, D.C.