Maksim Chmerkovskiy is back on the DWTS dance floor, and he is already apologizing for his outspoken antics on the show. 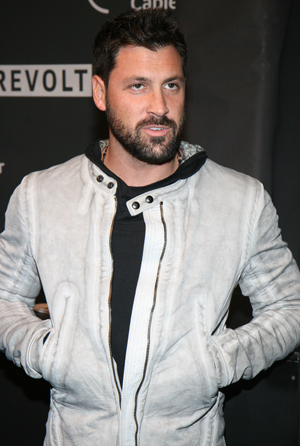 Not one to shy away from talking back to the judges when he disagrees with their comments, Chmerkovskiy was offering apologies on criticism he made about their remarks on Monday night.

The Ukrainian dancer vowed to keep himself from spewing opinions back at the judges, but unsurprisingly, he was not able to do so very well.

After being off for two seasons, Chmerkovskiy said he’s had time to think about his approach on the show and about trying to change his ways a bit. However, when the opportunity arose, he couldn’t stop himself and “just spoke back to the judges” again.

“Idiot! It’s one of those things, like, I was really trying to think about this while they were saying something that made no sense,” Chmerkovskiy told E! News backstage after the show. “I was like, ‘Maks, don’t speak. Just don’t speak. Just smile, let’s wait for the scores and be done with it. Move on, everyone’s going to be happy.'”

That was fast! Dancing With the Stars names new co-host >>

Chmerkovskiy’s celebrity partner, Meryl Davis, told him “it wasn’t that bad,” but the dancer insisted he wasn’t being “disrespectful”; he just wanted to know what the judges saw wrong with his and Davis’ dance.

“I genuinely wanted to know, were they seriously blind or just closed their eyes for that one second,” Chmerkovskiy went on. “But, look, I will apologize publicly when or if I find two mistakes that we did in this routine. That I will do.”