The thrash metal community mourns the announcement that the lead singer of GWAR was found dead Sunday in his Virginia home. 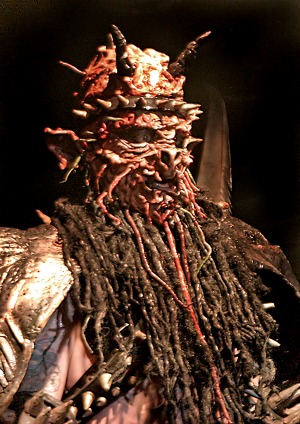 Dave Brockie, the lead singer of thrash metal band GWAR, was found dead on Sunday in his Richmond, Virginia, home, TMZ is reporting. He was 50 years old.

Law enforcement officials told TMZ that Brockie was found dead sitting upright in a chair. The same source said that foul play was not suspected and, “There were no drugs found, as far as I know.”

In a statement released today, Flanagan said: “It is with a saddened heart that I confirm my dear friend Dave Brockie, artist, musician, and lead singer of GWAR passed away. My main focus right now is to look after his bandmates and his family. More information regarding his death shall be released as the details are confirmed.”

Flanagan also said that authorities plan to conduct a full autopsy on Brockie.

It’s been an unfortunate year in thrash metal. The community also lost popular band Slayer’s guitarist, Jeff Hanneman, to liver failure at the age of 49 just last May.

GWAR is known for their ornately-grotesque costumes and bizarrely-staged political statements. They have garnered a sizable cult following who are mesmerized by the campy and bloody shows the band has become known for.

The band has also enjoyed a fair amount of pop culture glory. They were referenced in the movie Empire Records and were worshipped by the TV dynamic duo Beavis and Butt-head, who are known to be tough critics.

Brockie himself had a reputation among fans as a witty and intelligent musician who also dabbled in art and writing. His Twitter account was active as recently as two days ago, when he posted a statement about the protest at Fred Phelps’ funeral.

Sadly, this is not the first tragedy to strike GWAR over the past several years. In November 2011, guitarist Cory Smoot, aka Flattus Maximus, was found dead on the band’s tour bus. According to autopsy reports, Smoot died from a “coronary artery thrombosis brought about by his pre-existing coronary artery disease.” Smoot was just 34.

“They’re actually not the kind of guys known as partiers; they’re really solid guys,” said venue manager, Conrad Sverkerson, of the band at the time of Smoot’s death.