Bay finds her way back to Emmett, Daphne learns how to put her fears aside to be a doctor, Regina’s battles with her boss take a dangerous turn and Toby looks for a new purpose in the Switched at Birth Season 3 spring finale, “Love Seduces Innocence, Pleasure Entraps, and Remorse Follows.” 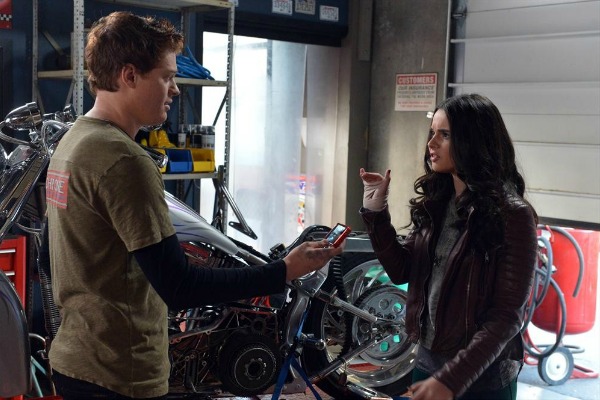 I can still remember discovering this show right before its second season and sitting down to watch the entire first season on DVD. Once I did a marathon of Season 1, I knew two things: It was a great show, and Bay and Emmett made the best couple ever.

Missed the last episode of Switched at Birth? Here’s our review >>

Sure, I’ve learned to live with them being apart. I thought that maybe their connection was never meant to be as boyfriend and girlfriend, but only as friends. But the only reaction I had to seeing them fall into each other’s arms at the end of this episode was pure joy. I do, of course, feel bad for Tank and I will admit that perhaps Bay didn’t make the mature decision by choosing to sleep with Emmett when she and Tank weren’t exactly broken up, but whatever.

This episode was full of happy moments for me. At first, I thought it was quite sad that Daphne was going to let her fears get the better of her when she first saw Adam at the clinic. But I think it was a lesson that she needed to learn sooner rather than later. Doctors don’t always get to treat people that they like, but they have to work beyond their personal feelings and simply take care of whoever is put in their care. When Daphne grabbed Adam’s hand and helped him out, even though, in her mind, he was basically an enemy and her attacker, I was very proud of her. I am definitely starting to think that she will make a fantastic doctor and I’m excited to see that happen. Season 10, anyone?

Another great moment was one that started out with heartbreak. Lucas Grabeel nailed it in this episode. That whole scene between Toby and his dad had me in tears, but I loved that it was Toby’s mother who actually got through to him. I hope that he won’t be in Iceland forever, as I can’t wait to see what new adventures he decides to take on now that one aspect of his life is over. Will he be a coach? A teacher? A musician? Something he hasn’t even hinted at yet? Only time will tell.

As for everyone else, Regina’s story got pretty scary there at the end. I know that Wes was behind all the manipulation and caused the people of her old neighborhood not to trust her, but I still found it incredibly sad that those same people that she loved were the ones throwing rocks in her window. Since when is that normal, grown-up behavior? Kathryn’s book getting leaked was a nice, little mystery, but I knew there was no way that Renzo would have done it. Finding out that her editor had done it was a surprise, but it looks like the plan was a good one. How will John deal with a wife who might turn out to be more famous than him? I guess we’ll have to wait until summer to find out the answer to that.

“I have other things in my life besides you and your book.”

Getting a very bad feeling as soon as I found out that Emmett was leaving school early to meet Mandy at some park.

How quickly John went from anger to concern when he saw Toby’s face.

Bay telling Tank she didn’t know why he wanted to be part of the fraternity. I have to admit, she had a good point.

Renzo telling Kathryn that she needed to wear that one bad review like it was a badge of honor.

Daphne helping Jorge treat Adam. So proud of her.

“When a door closes, a window opens. You just gotta find that window.”

Emmett opening the basket and finding a catfish in it. Ouch.

Finding out that Toby apparently found his window… in Iceland.

What did you think of the Switched at Birth Season 3 spring finale? Are you happy to see Bay and Emmett together again?