Based on a true story about a woman with multiple personalities, Halle Berry takes on the intense role of Frankie, who has two alter egos: a 7-year-old girl and a racist white woman.

Frankie & Alice is about a young woman named Frankie (Halle Berry) in the 1970s who’s having a clinical identity crisis. While she works to support herself as a go-go dancer, there are periods of her life that she can’t remember. As the lapses increase, her whole life begins to fall into chaos. When she’s faced with going to prison, the only alternative is to serve time in a mental institution.

In real life, Berry’s own mother was a psychiatric nurse, inspiring Halle to want to make this film that deals with mental health issues and the stigmas those issues often present.

“It’s an issue that’s been swirling around me my entire life. She was fascinating to me and seemed like a character that I could breathe life into because I have a fundamental understanding of the chaos of her situation,” Berry said. 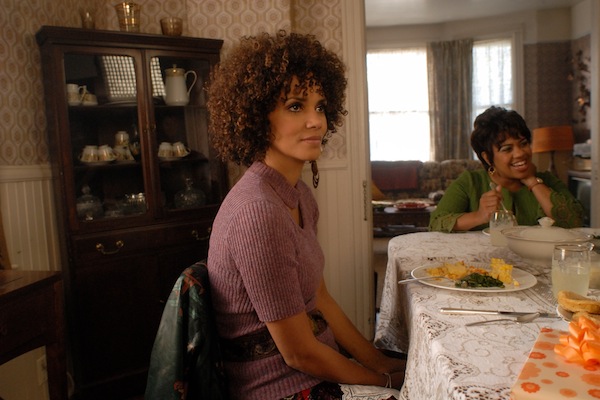 If there’s anything Berry is good at it’s tackling roles about strong, yet complicated women. “She is a survivor,” Berry said. “She’s not a victim by any means. But she hasn’t quite realized the dream for herself. She’s smart and manages to be the kingpin of her environment. At the club, she’s learned to make the most money, and she’s the one the other girls want to be around and be like.”

In our exclusive clip, we see Oscar-winner Berry standing firmly in Frankie’s platform shoes, giving advice to another young stripper. Wearing a gold chainmail top and earrings made from glittering concentric circles, Berry commands attention, appearing worldly yet vulnerable at the same time.