Some of The Walking Dead survivors have reached Terminus. But, will the seemingly safe place turn out to be a place of sanctuary or more danger? 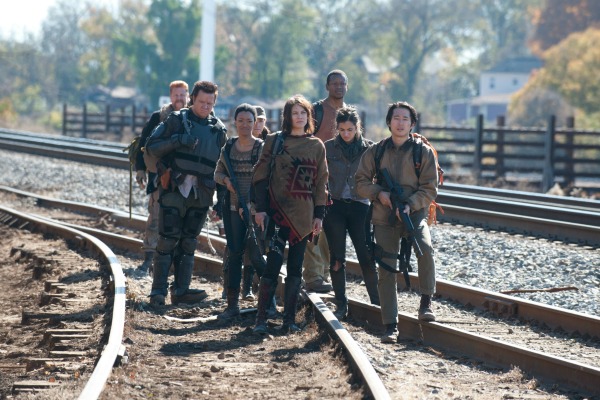 In the previous episode of The Walking Dead, titled “The Grove,” Lizzie casually killed her sister so that she could wait for her to “change,” and Tyreese and Carol made the terrible decision to end her life as she couldn’t be trusted with people anymore.

The Walking Dead “The Grove” sneak peek: Tyreese and Carol split up? >>

In the Sunday, March 23 episode of The Walking Dead, titled “Us,” there were some happy reunions to make up for last week’s haunting episode. It was nice to see some of the survivors reunited with the people they loved and make it into the place known as Terminus, but will it turn out to be the sanctuary it has been advertised as?

Glenn and Maggie have been split apart since the attack on the prison, but neither of them ever gave up on searching for the other one. Glenn ended up traveling with Tara and finding Abraham, Eugene and Rosita along the way. Abraham tried to convince Glenn to help him on his quest to get Eugene to Washington, but Glenn was more willing to go it on his own than go in the opposite direction from Maggie. As for Maggie, she proved she, too, was willing to travel on her own rather than be kept from her search for Glenn.

After all they’d been through, it was truly heartwarming to see Glenn and Maggie reunited in the tunnel. Now, two more groups of survivors from the prison have found each other, but what about everyone else?

Rick, Michonne and Carl are headed for Terminus as well, but it may be far from safe for them once they get there. The group of oh-so-charming fellows that Daryl is traveling with are, of course, the same guys who Rick hid from in the empty house when he was recovering from his wounds and it turned out that they’ve been on his trail ever since. They, too, are headed for Terminus, but only to get retribution from Rick.

At this point, the survivors, as well as some people they’ve run into along the way, are headed to Terminus. So far, only one person has been seen at this supposedly innocuous location, which makes us wonder if perhaps she might be the only person there.

Even if the town is full of people, does that mean it’s still safe? We’ve already seen what one town led by one crazy person could do to our heroes; who’s to say this new place will be any different?

If the town does indeed turn out to be a sanctuary for all, what will happen when the group Daryl is with arrives and decides to take their revenge on Rick? No matter what, the other prison survivors will never let them hurt Rick without a fight. It would seem that, no matter what happens, Terminus may not be the sanctuary the survivors are hoping it will be.

What do you think will happen once all of the survivors on The Walking Dead reach Terminus?