He’s a father of three, but that doesn’t stop the ladies from loving him. Chris Hemsworth makes quite an impression at Wizard World. 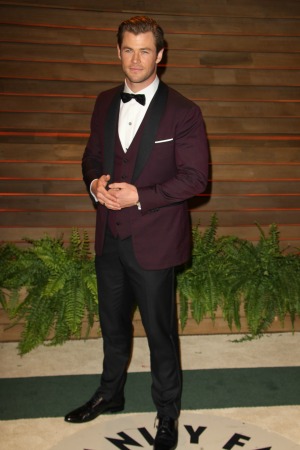 Marvel has an incredible fan base, with properties like The Avengers, Iron Man and Captain America. However, it seems to be Thor, played by Chris Hemsworth, who is the most popular character with the ladies. Over the weekend, the Australian actor appeared at Wizard World Comic Con in Sacramento, California, to talk about his role as the superhero.

In an exclusive clip from the event, the video shows multiple women stepping up to the microphone to ask Hemsworth in-depth questions about his hair, his muscles and kissing in a scene.

One attendee queried, “What kind of conditioner do you use?”

That’s when the 30-year-old star quipped, “Thoreal,” — a pun on his character and the L’Oréal brand, which has become an Internet inside joke among fans.

“None,” he replied and he kept his shirt on.

Then there’s always romance. A woman inquired, “I was wondering, is it really hard to kiss onscreen?”

He shared, “It’s all pretty awkward. You feel like a kid. Me and Natalie [Portman] just got the giggles all of the time. We’re just laughing through the kiss.”

Hemsworth took all of the questions in stride and looked like he had fun at the event. His next Marvel film will be Avengers: Age of Ultron, which is slated to be released May 1, 2015.