Tyler Glenn of the Neon Trees has a big announcement, and is excited to be able to come out to the world in Rolling Stone. 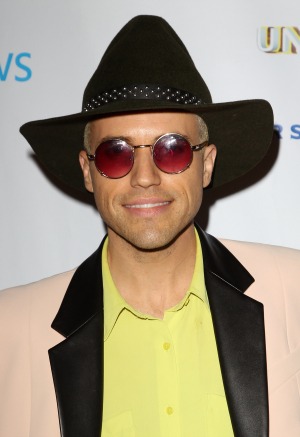 Neon Trees’ lead singer Tyler Glenn has never hidden who he was, but decided to be completely open in the new issue of Rolling Stone magazine. The singer has announced to the world that he is gay.

Ellen Page and coming out in America >>

“I’ve always felt like I’m an open book, and yet obviously I haven’t been completely,” he said.

Glenn is from Provo, Utah, and has been Mormon his entire life. He said he knew he was gay from a very young age, but never made it public until now.

“I had my crushes on guys throughout high school, but it was never an overwhelming thing until my 20s,” he explained. “Then I’d be dating girls and in love with my straight friend and it was the worst feeling in the world.”

Throughout his life he also struggled with his church’s teachings and how he felt about himself.

“We were always taught, and I hate this word, ‘tolerance,'” he said, explaining his life in the Mormon church. “The only time that felt different was when the Prop 8 thing came up.”

Glenn is referring to the estimated $22 million that the LDS church spent to fight legalized same-sex marriage in California back in 2008.

The singer recently admitted his band’s new album Pop Psychology is about his struggles with mental illness. As he was finishing those songs he decided to tell his close friends and family his news, in October of 2013.

How did Lance Bass come out to *NSYNC? By accident! >>

He also said he has been inspired by the many people from all areas of pop culture that have been coming out, especially those in fields where they may face backlash for admitting who they are.

“I really love all of the sports figures that are coming out recently,” he said. “I appreciated Michael Sam was like, ‘I want to be able to go to the movies and hold hands with my boyfriend.’ Even hearing him say ‘boyfriend,’ I was just like, that’s cool.”

Glenn tweeted his excitement about his big announcement on Monday.

Got some stuff to tell you today

I have a lot to say, and a lot more I do say in the upcoming issue of Rolling Stone magazine.

But all I can say right now is I'm the happiest lil weirdo i've been in my whole entire life. Thank you for the support and love. XT

Yes. I am a happy and healthy Mormon gay pop star. I don't know what it all means, but I'm ok with it. http://t.co/PEcgvRsGn6

Glenn’s interview in Rolling Stone will be on newsstands Friday, March 28.