Ireland Baldwin isn’t only making changes in her romantic life; she’s also making some colorful changes to her appearance. Gone is her lilac hairdo — she now prefers a turquoise hue. 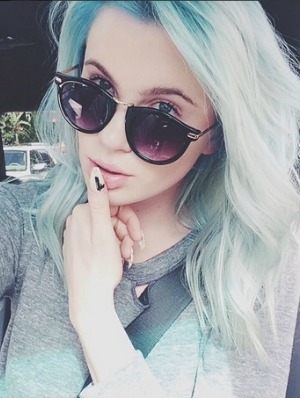 Perhaps the fact that Ireland Baldwin is newly single — having split from her surfer boyfriend Slater Trout earlier this month — has made her want to express her individuality even more than usual because the model has just changed her hair to another colorful shade.

Baldwin hasn’t only been making changes to her romantic life, but she’s also making some colorful changes to her physical appearance and just recently debuted a set of lilac locks on her Instagram account.

According to Us Weekly, at the time of her hair color change, Baldwin wrote, “I could get used to this.” She later added, “Purple hair and work out clothes really don’t go together. Like I may have to give up physical activity for my purple hair.”

However, the daughter of Alec Baldwin and Kim Basinger obviously didn’t love her new hairdo as much as she had suggested because she has already opted to dye her hair a brand new turquoise blue hue.

Baldwin uploaded a selfie of her sitting in a car and sporting a new look on Thursday. She captioned the image, “Tangled up in blue || thanks to all the babes at the @mrchrismcmillan salon. Love you @anderssonjj and @hairbymarilee.”

And whilst we have seen quite a few famous faces opt for a lilac hairstyle in the past, we have not seen too many embrace turquoise, but Baldwin manages to pull it off. However, her life is not just all about changing her hair; she’s also been making a lot of new friends.

According to Us Weekly, the model joined Entertainment Tonight on the red carpet at the 86th Academy Awards on March 2, and she had plenty of snapshots with Hollywood A-listers, including Chiwetel Ejiofor, Kevin Spacey, Jennifer Lawrence and Jared Leto.

We guess being single is working in Baldwin’s favor then?