The internet is lighting up with news that Mila Kunis is pregnant with Ashton Kutcher’s baby. Kim Kardashian wasn’t ready to give up the spotlight for being on the cover of Vogue with Kanye West, so she decided to write Kunis a letter filled with her infinite pearls of mommy wisdom. (Yes, the following is a joke.) 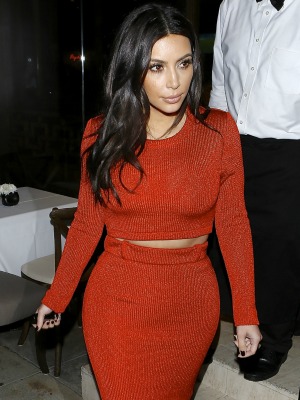 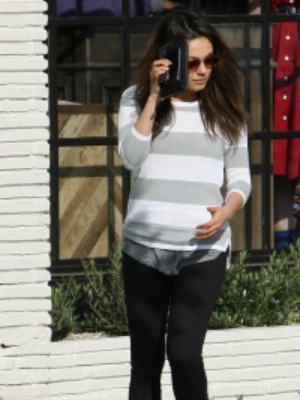 Hey, girl! This is, like, Kim Kardashian. You may have heard of me. I just landed the cover of Vogue with my baby daddy, Kanye West (aka #WorldsMostTalkedAboutCouple). So, I like, heard that you were, like in a family way, so I decided to like, give you some mommy advice.

The first thing you should know about being pregnant is that it’s all about you, so feel free, to, like, lay on the drama. Thick. You can get away with it because you are growing a mini-me! When I was pregnant, I was like, forever crying and rushing to the hospital and like, calling Kanye. People feel sorry for you. So take advantage of it. I did have a life-threatening, super rare condition called pre-eclampsia, which affects roughly one in 10 pregnant ladies, so I was like, almost dead for most of pregnancy.

The other rare pregnancy disorder I had was, like, weight gain. I got like all super fat and disgusting. I was gross. For a while, I thought babies were stupid. Plus, the tabloids were all like mean and everything. Like all people could talk about was how fat I was, which I thought was super unfair because I was all, like, growing a baby and feeding it with, like, you know 10 pizzas a day. So girl, ignore the haters. It’s the one time in your life when you can eat, like, you know food with lots of cheese and stuff because that’s dairy, and babies need milk.

When it comes to baby names, be like, super creative. Kanye and I got a lot of crap for naming our baby North but, like, who wouldn’t want to be my baby and who wouldn’t want to have a super unique name like North? People are soooo dumb. It’s North West! Get it, people? Sometimes, I’m just like, “God, am I the only like super cool person left on the planet?” It will be harder to find a really cool baby name for you because Ashton’s last name is Kutcher, which doesn’t really mean anything. And don’t, like, name your kid East or West or South because I’m gonna have, like, more kids.

So, like no hard feelings, but I looked at your Instagram profile, and it kinda like, sucks. If you want to be a good mommy, you’re going to have to get a lot better at selfies. The best way to get back at the haters when you get super lardo is to lose weight super fast. You do this by having the plastic surgeon come in after you squeeze out your kid and get lipo and a tummy tuck. Then you dress up really cute, pretend to work out at the gym and take lots of selfies to prove that you went to the gym. That, like, totally makes the haters mad.

Oh, you’re going to have so much fun being pregnant! Before I get back to my fake gym workout, I want to remind you to, like, totally profit from your baby. Like, I designed, like baby clothes and everyone wants to buy them because my baby is so cute! My mom told me it’s never too early to start making money off your kids, and my mom is always, like, totally right.

OK, Mila, I’m behind on my tweets for the day! Gotta run (not really, ’cause I had plastic surgery). See you in the tabloids!