The battle of the selfies is on! Remember Ellen DeGeneres’ star-studded Oscar selfie? Well, Jimmy Kimmel has just taken one with the prestigious Clinton family. 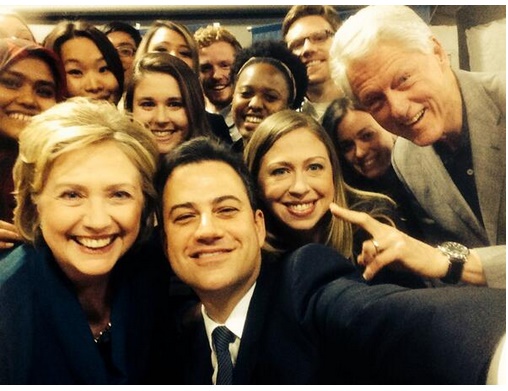 The world has still not forgotten the most epic celebrity selfie ever that broke not only the Twitter record for the most retweets but also the social media site itself on the night of the Oscars.

And Jimmy Kimmel has been so inspired by DeGeneres’ standout selfie that he has decided to make one of his own. Forget the Hollywood A-listers — the Jimmy Kimmel Live star has the Clinton family in his snapshot!

Kimmel took to Twitter on Saturday to post a group shot that is equally as epic as the one from the night of the Oscars. It includes former U.S. President Bill Clinton, his wife and former Secretary of State Hillary Clinton and their daughter Chelsea Clinton.

According to the New York Daily News, the creative snapshot was taken after Kimmel’s interview with the former first family at a panel of the Clinton Global Initiative University in Tempe, Arizona.

The interview covered several topics both personal and political, and Kimmel even asked the former first lady whether she plans to run for president in 2016.

“I am very much concerned about the direction of our country,” Hillary replied. “It’s not just who runs for office but what they do when they get there and how we bring people together and particularly empower young people so we can tackle these hard decisions,” she added.

DeGeneres’ star-studded selfie may have become one of the Oscar highlights of the year, but we think Kimmel’s Clinton family group shot is equally as epic.

Tell us which selfie you prefer in the comments below.