Is Rihanna a fan of Teen Mom? The superstar has gotten creative with the promotion for her upcoming Monster tour with Eminem by creating a spoof of Teen Mom 2 star Jenelle Evans’ hilarious viral video. 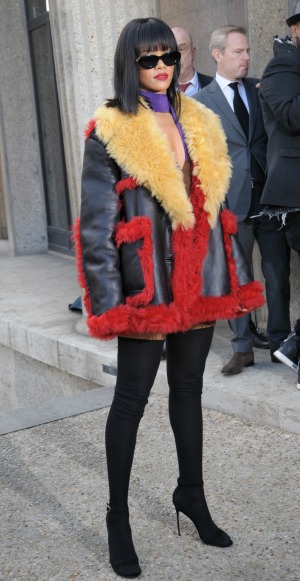 Is Rihanna a fan of the hit MTV series Teen Mom? She may just be because she has decided to promote her upcoming Monster tour with Eminem by using Teen Mom 2 star Jenelle Evans’ 2012 viral video — in which Evans famously claims she cannot go to jail because she’ll be attending a Kesha concert — as inspiration for a hilarious spoof.

“I really can’t miss that concert,” she explains in the clip. “That’s why I got all these feathers in my hair.”

However, the “Diamonds” hit maker has decided to put her own spin on the original video and uploaded an edited version to her Instagram account on Saturday, which she captioned, “the. monstER. tour. #NEWYORK #LOSANGELES #THEDETROIT be like……… @eminem.”

And in the new video, Evans has no concerns about attending a Kesha concert; she’ll be attending a Rihanna one instead. When Evans says, “It’s not just a concert, it’s —” team Rihanna has replaced where the star originally said Kesha with an announcer saying, “Rihannaaa!”

Rihanna has conquered the world, next stop space >>

It’s an inventive and hilarious way for RiRi to promote her Monster tour, don’t you think? The Barbadian beauty and Eminem will kick off their Monster tour with a show at the Rose Bowl in Los Angeles, California, on Aug. 7.

So what does Evans have to say about the spoof?

She was clearly excited as she took to Twitter to say, “dude Rihanna actually noticed me lol.”