Miguel knows how to give it to the ladies. Well, give us what we want to hear with his sensitive, comforting (and heart-racing) voice. His featured song on the Girls soundtrack will do dark, delicious things to you. 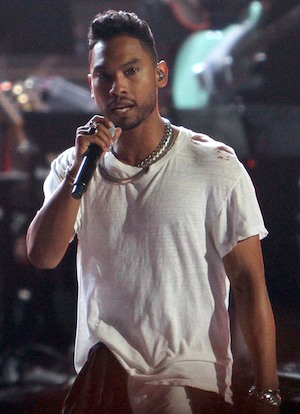 Miguel tones down the sex and turns up the heartfelt emotions for “Simplethings.”

Featured on the HBO Girls soundtrack, “Simplethings” embodies the crises the quirky characters all endure on the show. What crises? Their notorious and tumultuous pursuits of love and the fact our once-unattainable standards in our early 20s melt down into just wanting a partner who understands you. If you didn’t find Miguel swoon-worthy already, he took the time to actually pen this track for the hit show.

You’ve seen Lena Dunham naked so many times, who can really top that count? >>

The song gives a new face for Miguel to wear (one that isn’t tensed up in a heated, sexual grimace). Instead it showcases a softer, gentler and emotional side to the singer. But the Internet isn’t talking about Miguel as much as they are about his guitarist, Dru Decaro, who feasts on the strings as he delivers an empowering accompaniment. It’s gritty, sexually charged, but ascends to a different level of convincing because of how touching it is. It’s like Miguel is singing a Bryan Adams song with backup instrumentals from Marcy Playground.

Lena Dunham is DONE after Girls >>

It wanes more on the rock side than the R&B side, but it’s still Miguel, showing fans he’s got something more north of his nether regions. I think fans will be more than thrilled to add this to their favorite playlist.

Sit back, relax, and let us update you on all things music >>

Don’t cut me for that jab I made, all you Miguel fans. You know better than I do that he’s known for his bedroom playlists more than anything. In the meantime, slip into his smooth voice, drown in his desire and reawaken energized and hopeful that you find someone like Miguel.

Because, ladies, trust me when I say this is the song that makes you want to marry someone. Looks and money can and do disappear, but that right someone makes it all worth it. We all just want the simple things, don’t we?