We chat with Amir Arison about his wildly different roles in NBC’s hit series The Blacklist and HBO’s Girls. 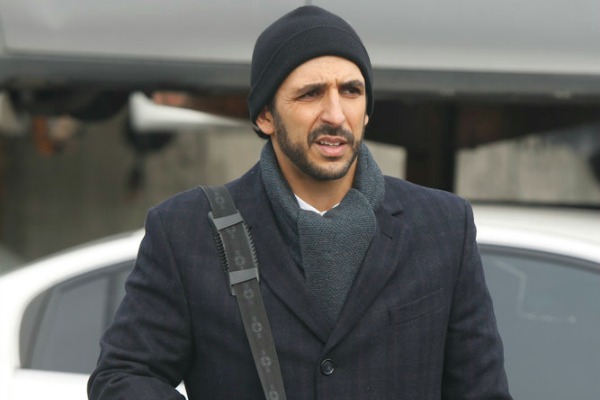 The next episode of The Blacklist airs on Monday, and according to star Amir Arison, his character Aram “may have met his match” in the new Blacklister. The next name on Red’s list is a person who’s going to put Aram’s computer skills to the test.

What about Arison’s skills at the computer? Turns out he’s not too bad, either. “Do I have a master’s in chemical and technical engineering, and do I know how to hack into satellites and transfer $5 million into my own account? If I did, I wouldn’t need to act on The Blacklist,” Arison joked, adding, “I may be not as good as Aram, but I’m pretty good.”

Fans of Aram might be surprised to learn that he wasn’t supposed to appear in more than one episode. But the role was fleshed out once the creators saw what Arison brought to it. “I did a little improvisation by the computer and they used it,” Arison revealed, “which is pretty rare for a scripted network show. When I saw that they used it, I said, ‘Oh, they’re responding to me.’ And then sure enough after I saw that, I got called in for another episode, and then more episodes kept coming in. Once we got to the two-parter I saw them really kind of writing that persona that I improvised with, and it was amazing.”

The two-part episode was “Anslo Garrick,” which gave Aram a chance to take part in the action. Unfortunately, it also put him on Red’s radar when the criminal mastermind went looking for the mole. Luckily, Aram came out clean — a fact that made Arison happy as well. “On this show, [if you wrong] Liz or Reddington, then you have an expiring clock. So I’m happy that I didn’t wrong either Agent Keen or Ray Reddington.”

SPOILERS: Are Girls‘ Adam and Hannah headed to splitsville? >>

As for Aram’s future, Arison hopes that more might be learned about how he’s dealing with all of the things he’s been put through as part of the team, as well as more of his life at home. “I guess I hope at some point that they show Aram’s feelings towards those situations or how he’s handling those situations. I guess the next thing that would be fun is to show a little bit of Aram’s personal life,” Arison said.

The writers have been taking some cues from Arison on what to write for Aram, something that has never happened before in his career. “You hear about that [from] acting teachers and people in the business [who say] the best roles on TV are when the writers start writing to the actor’s voice and it starts to blend. This is the first time in my career that that’s happened, and it’s very exciting and very magical.”

When asked to talk about his role on this season of Girls, Arison responded enthusiastically, sounding like a big fan himself. “What a great show! Oh my God, I love Girls!”

Arison played the role of Kevin, a guy that Hannah didn’t like at all at first, but he seemed to maybe grow on her after a while. Arison liked playing the antithesis of Hannah. “I think I was basically Hannah’s cautionary tale of what can happen to you if you sell out to corporate writing,” Arison said. “So I could be everything that Hannah doesn’t want to be. I was, like, bitter, proud, arrogant, judge-y, not that sharp when it comes to ideas. Everything that Hannah doesn’t want to be, I got to play.”

Between Aram and Kevin, the two roles couldn’t be more opposite from each other. For Arison, it was fun playing both sides of the same coin. “Aram is probably closer to how I am day to day, but I guess all of us have an inner diva, so I think I let that out for Kevin.”

Can’t get enough of Arison? Don’t worry, he’s got plenty more projects coming up, including Merry Friggin’ Christmas, a film that is due out later this year. The film stars Robin Williams, and Arison will play “an Afghan immigrant who speaks very little English, so comic mayhem ensues. That was a blast.”

Another recently wrapped project is an indie film called Jane Wants a Boyfriend. The movie stars Eliza Dushku as a woman with a sister Jane (Louisa Krause) with autism. Arison plays Dushku’s fiancé and best friend to the man that Jane wants to date. “That was made with a lot of heart,” Arison said about the film.

As for the Aram fans out there, Arison said they should look out for the second season of his digital series H+. Arison said Aram fans will especially like it because “it’s all about the future of computers, a computer virus and what happens if everyone has got an implant with the Internet in their head.”