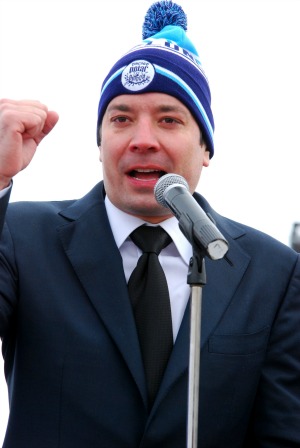 When Jimmy Fallon has a “crazy” idea, his Tonight Show guests know they better step up to the plate. Billy Joel rose to the occasion Thursday night, performing “The Lion Sleeps Tonight” not with the house band, but with an iPad’s help.

Introducing the concept to the 64-year-old “Piano Man” singer, the new dad gushed, “To sing with you is the craziest thing.”

Creating a four-part backing track with the help of iPad app Loopy, Fallon explained, “If we do it right, we can be a two-man doo-wop group.”

The man seen here bundled up at the press conference for the Chicago Polar Plunge 2014 earlier this month did the honor of voicing the first round of recordings, then he and Joel alternated turns while increasing pitch.

Get your aweema-wep’s ready to repeat, and check out the Fallon-Joel singalong go all the way up to a pair of impressive falsettos!

“Wow that was amazing to watch. The looping app is something everyone can use but in the hands of real talent it’s sublime,” one person wrote on YouTube. Another wrote, “I’ve flipping died and gone to heaven. Love this!”

There is at least one doubter out there, however. A commenter not willing to believe such a top-notch performance is possible commented, “Jimmy’s mic is dubbed. I am guessing Billy’s is lip synching as well.”

Say it isn’t so! Looked like the real deal to us.

What do you think of the Jimmy Fallon and Billy Joel iPad video?