We take a look at preview videos from the Switched at Birth Season 3 finale, airing on Monday, March 24. Find out who’s missing, who’s in big trouble and who gets caught in a compromising position. 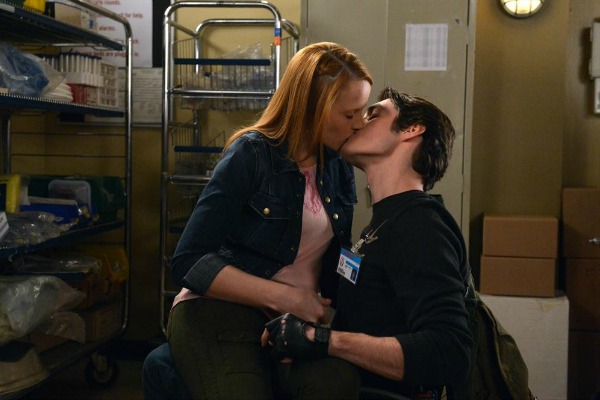 In the last episode of Switched at Birth, almost everyone found their life in turmoil as some relationships ended while others began. Bay wondered if Ty was really the right guy for her, Daphne realized that she liked Campbell more than Jorge and Toby was surprised when Nikki came back into town and asked him a very difficult question.

Missed the last episode of Switched at Birth? Here’s a recap >>

That leaves a lot of lives and relationships that need to be addressed before the season is over. What’s in store for the show’s third season finale? Take a look at some sneak peek clips and find out.

In the first clip from the episode, John and Kathryn have two very different problems. Just as John finds out that Toby is mysteriously absent from work, Kathryn discovers that someone has leaked her book. As they discuss all the people who have seen the first draft, they get suspicious that Renzo may be the culprit.

In the second clip from the episode, Daphne and Campbell are spending some quality time making out when Campbell decides to pull a mini prank on Daphne. After a quick giggle and a few more kisses, the two are interrupted when Jorge walks in. Turns out Daphne hasn’t told him about her and Campbell. What a way to find out. Oops.

In the third clip from the episode, Emmett and Travis are hanging out when Melody comes in with one of Emmett’s latest tests. He got a D on his history exam and she is not happy at all. Melody immediately assumes that Emmett has been spending too much time talking to his new girlfriend in Seattle, but Emmett argues that it’s just one test and not a big deal. Things escalate quickly until both mother and son are declaring they can’t wait until Emmett gets old enough to move out for good. Ouch.

What do you think will happen in the Switched at Birth Season 3 finale?