Ian Somerhalder got cozy with his former co-star and girlfriend, Maggie Grace, during the Lost 10th anniversary reunion over the weekend. 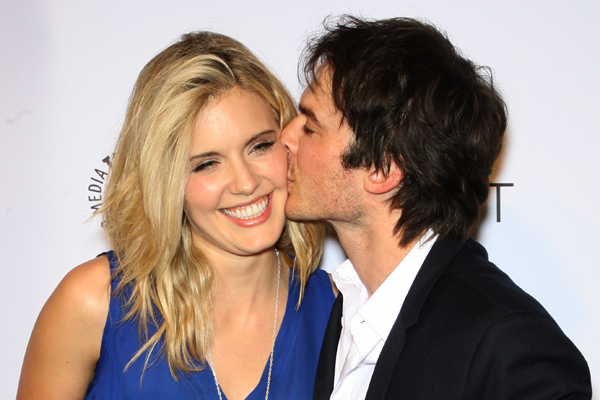 Ian Somerhalder and his former sweetheart/co-star Maggie Grace reminisced about old times by getting close and cozy during the Lost 10th anniversary reunion at PaleyFest in Los Angeles last weekend.

The handsome couple seemed to have picked up where they left off after breaking up in 2006, getting cozy and teasing each other playfully, Us Weekly reported. An onlooker told the magazine that the pair had lots of chemistry together as they constantly flirted with each other. Somerhalder even kissed Grace’s neck as he referenced her while talking to the other Lost cast members.

Somerhalder and Grace played step-siblings on the ABC hit series and dated while they starred together on the show. A couple of years later, Somerhalder landed the role of Damon on The Vampire Diaries and began dating his co-star on that show, Nina Dobrev. The couple broke up last May, however, and the 35-year-old former male model has remained single since.

But, romance was apparently in the air again for the hunky actor when he was reunited with his Lost love (pun intended). Grace posted several photos of the reunion event on her Instagram account, showing her very close to Somerhalder in a few of the shots.

In one picture, the Louisiana native is shown kissing Grace on the side of her head, while another features the pair sitting close on a couch along with other cast mates, including Josh Holloway and Matthew Fox.

Grace posted a third snapshot with herself being squeezed between Somerhalder and Holloway with the caption, “#paleyfest? More like #LOVEfest! Such a great night, thank you to everyone who participated! @iansomerhalder #joshholloway”

During their onstage panel show, Somerhalder shared a story about Grace where she played a trick on him during a kissing scene in the first season of Lost. In one of her “proudest moments,” Grace stuffed her mouth with garlic and smoked a cigar just before Somerhalder was to dive in for their on-screen kiss.

No word yet on whether the pair are actually dating, or if they were just being flirty at the reunion. No doubt however, if they are indeed back together, it won’t be long before their relationship is soon announced.