Ever since Magic Mike, Joe Manganiello has lived in our collective psyche as a massively sexy superhero stripper. But preparing for his latest film took more research than visiting a few strip clubs. We sat down with the Greek god to find out what it was like hanging with members of a real DEA Task Force and working with Arnold Schwarzenegger. 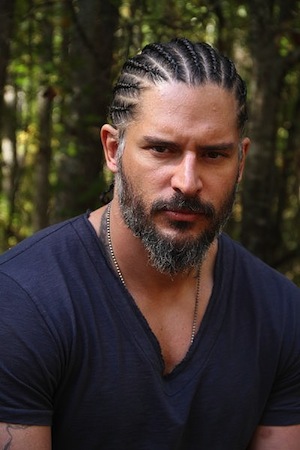 Joe Manganiello is no stranger to researching his characters, but to play Joe “Grinder” Phillips, he had to get cozy with real DEAs.

“For four months straight, I worked alongside these guys, and two months leading up to the movie I was doing ride-alongs. I was in the ring when stuff was going down.” Wow, that’s intense.

Manganiello agreed. “It was also adrenalizing and scary. At one point, I turned to this guy and said, ‘You don’t wear a vest?’ and he said, ‘No, if it’s my time, it’s my time.’ I was in some rooms I shouldn’t have been in. I saw a lot.”

We also wanted to know what it was like to work with Arnold Schwarzenegger, especially since they had such a cantankerous relationship on the screen. In one scene in particular, they are screaming in each other’s faces. We asked if he packed in the breath mints.

“Well, in this movie, it was like packing in the chewing tobacco. I would say that, like, 98 percent of law enforcement is chewing tobacco. But it helped that Arnold and I became immediate friends. He wrote the foreword to my book. We’ve traveled around and we’ve gone on some adventures in the past year and a half since we stopped filming. It helps me be even nastier when I know that we’re friends. I can go as nasty as I want.” 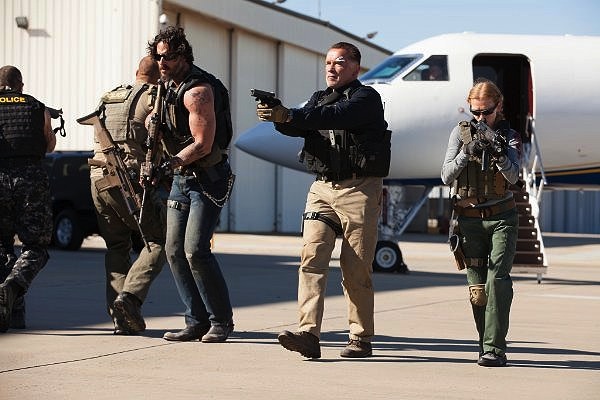 Click here to see exclusive stills from the movie.

We asked Manganiello about why he was sporting cornrows in the film. “One of the undercovers I worked with had cornrows for a while. You want to look like a thug, not like a cop. Like, in Training Day, Denzel looks like a gangster because he has to mix with gangsters.”

25 Things to know about Joe Manganiello >>

To really look intimidating, Manganiello gained about 20 pounds of muscle. “A lot of people didn’t recognize me,” he said.

On being such a daunting dude, he told us, “Probably one of the most defining factors of my life has been being a tall, big guy. You’ve got to be crammed into some plane coach seats once in a while, or pants that don’t fit. But you figure it out.”