Colleen O’Rourke grew up in the small town of Manningsport, New York, where everyone knows everyone — and everyone’s business. 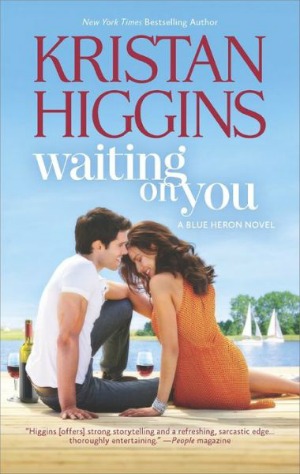 Colleen O’Rourke lives in Manningsport, New York, with her twin brother Connor. Together, they run the townie bar where chatter runs rampant and Colleen is no innocent in running the gossip mill.

For instance, she is the famed town matchmaker. She’s been a bridesmaid a dozen times because of her love savvy — so why is she still single? She’s still hung up on her high school love, Lucas Campbell, whom she hasn’t seen in 10 years since he broke her heart.

Lucas lives in Chicago, but surprise! He’s just arrived back in Manningsport because his Uncle Joe is ill. Lucas isn’t an easy guy to overlook. He’s like a hot Puerto Rican pirate or a “thuggish angel,” and even though Colleen outwardly hates the guy, he still makes her stomach do handsprings.

Lounging around with Kristan Higgins >>

But Colleen has other things on her mind. She’s taken on her most difficult matchmaking assignment yet: trying to set up butch chick Paulie with town hottie Bryce (who just happens to be Lucas’ cousin). To keep herself distracted from Lucas, Colleen is willing to make this unlikely duo a perfect pair.

So why can’t she stop thinking about Lucas? Maybe because his kisses set her on fire, and he still occasionally calls her “mia” (mine). Here’s the thing, though: Lucas lives in Chicago and Colleen isn’t leaving Manningsport. Plus, he hurt her before; what will stop him from hurting her again?

Waiting on You is a light, humorous flight of fancy filled with funny internal monologue and girly inside jokes. Colleen is a tough cookie. She knows what she could get herself into with Lucas — again — and she fights her feelings, tooth and nail.

Author Kristan Higgins gives good voice to Colleen and Lucas as we hear from both of their perspectives. The conflict is clear and hard to fix. Sometimes the past really does steal the magic of the present. But as Paulie tells Colleen, “You have this beautiful pirate of a man who looks at you like you’re naked and covered in Krispy Kremes!” Maybe so, but will love last, or are Colleen and Lucas doomed to repeat themselves?