Then don’t fix it, Enrique. Forget versatility. You have a fierce Latin charm and succulent singing chops. With Enrique Iglesias’ new album, you get everything you’d expect. There’s all the romance you could ever desire and more anthems than an 18+ club. 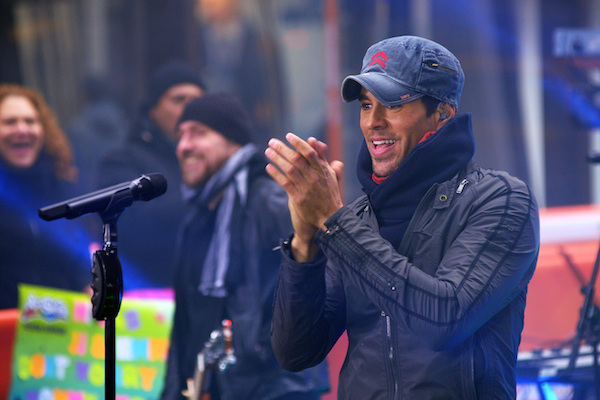 “You and I” is like the club version of “Hero”

He can be your hero, baby. Don’t you remember? While “Bailamos” couldn’t be erased from your mind, “Hero” stuck in mine. He just understood what any hopeless romantic desired.

He knows what ladies desire, too. Remember this TMI snippet? >>

And, it definitely didn’t hurt that he was dreamy in the eyes (and hips).

So through the years, other than being hopelessly devoted to the as equally unfairly hot Anna Kournikova, he would regularly report for musical duty with a club anthem.

When he wasn’t doing that, I regretfully can attest to not knowing what he was up to. Though I personally preferred his slower, ballad-oriented music, I wasn’t complaining, either. Sort of along the lines of what I had said of Jennifer Lopez‘s “I Luh Ya Papi,” these artists know the value of what they are producing, so I can’t knock them for being strategic business people.

There’s nothing wrong with enjoying club music, so stay updated on the latest releases by signing up for our newsletter >>

I listened to Enrique Iglesias‘ album, Sex and Love, and I can vouch this album is classic Iglesias. He told the Daily Mail that he wants everyone to know the title is hard-hitting and explanatory of what the entire album is about.

There are no complaints from this corner of the room. Love and sex is a topic we don’t mind hearing about from this scintillating 38-year-old. But, that being said, though most of his slow songs are in Spanish, the rest are clubby and predictable, with additions from the likes of Pitbull putting the final nail in that coffin.

“You and I” is what “Hero” would be if you stripped out the sincerity, pretended Iglesias wasn’t a cringe-worthy crooner (I mean that in a nice way, I cringe in all the right places), and put it in a remix-ready blender. The lyrics are much simpler and straight to the point:

What’s the club anthem rating? A 7/10. So sure, he will be your hero, just one who rescues you from underage teens who pregamed with cheap tequila, chased it with wine coolers and are creeping far into your personal space at the club.

Being a hero is relative to the situation anyway, right?

Jennifer Lopez loves her daddy with “I Luh Ya Papi”
The best song on the Divergent soundtrack
The worst song ever: The Chainsmokers “#Selfie”