Taylor Momsen can’t hide from the infamous tampon-string incident of 2010, so she may as well address it. The rocker shares her side of what happened, along with her take on if posing for Playboy is in the future. 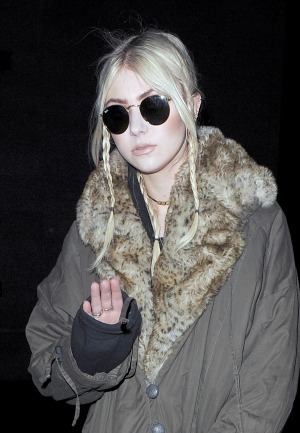 Taylor Momsen knows a thing or two about being on the notorious side of fame. The young star, who grew up in front of television and movie cameras but turned to music in 2010, has faced her share of scandals — some her fault, others not so much.

Opening up to The Daily Beast about the photos from that year’s Warped Tour that just won’t go away, the now 20-year-old explained, “My tampon string was put on the internet when I was 15 because some a*****e shot up my dress, and it made big headlines.

“For a year, if you Googled ‘Taylor Momsen,’ the tampon photo was the first thing that came up. When that happens, you just go, ‘I really just don’t give a f**k,’ and you close the computer. People are going to say what they’re going to say, and the tabloids will always spin s**t.”

Taylor Momsen and 16 other actresses with amazing voices >>

The former actress, who is known for taking a less-is-more approach to outfits onstage with The Pretty Reckless, went on to insist, “Sexuality and rock ‘n’ roll go hand-in-hand and have since the beginning of time, and if anyone thinks I’m doing anything more controversial than f****n’ Led Zeppelin, you’re insane, because I can see Robert Plant’s f****n’ dick, you know?”

There may be even more Momsen nudity in the years to come.

“It’s not something I’m pursuing. It would have to depend on a lot of factors [but] I don’t rule anything out until it hits me in the face,” she explained when asked by BANG Showbiz if she’d consider posing for Hugh Hefner‘s Playboy magazine.

“It would depend on the shoot and if there was a purpose for it. I’ve done FHM and Maxim. FHM was based on the ‘My Medicine’ video, and the Maxim shoot was a take on the rock and roll lifestyle of New York City. Everything has to have a story behind it, not just, ‘Taylor getting naked again.'”

Make your prediction now: Will a Taylor Momsen Playboy spread come to pass?