The world is about to get two new warriors cast down to live among us humans: Chris Hemsworth and wife Elsa Pataky are on the brink of welcoming twins. 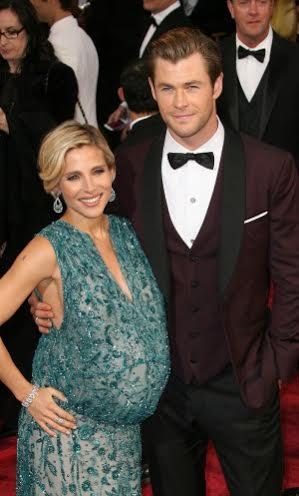 Planet Earth is going to be a little safer and most likely more beautiful. The gorgeous couple made up of Thor actor Chris Hemsworth and his wife, Elsa Pataky, are currently preparing for the delivery of twins.

According to TMZ, Hemsworth and Pataky are at Cedars-Sinai Medical Center and surrounded by tight security. A source says two security guards are standing outside the hospital suite while the nervous papa paces the hallway with another guard.

The couple began dating in 2010 and were married only a few months after meeting. They announced in January 2012 that they were expecting their first child, India Rose Hemsworth, who is now just twenty-two months.

No word on the gender of the new additions yet, but if it is anything like their first go-round, our guess is just as good as the parents to be. Pataky said of her first pregnancy, “Since it’s our first child, we don’t care if it’s a boy or a girl, our only wish is that it’s healthy.”

And if Hemsworth’s gushings about being a father the first time serve as any indication, the actor is sure to be filled with excitement at the present moment. When the couple announced their second pregnancy, he was filled with wonderful things to say about the joys of parenthood.

“I think parenthood brings out the child in all of us, that’s what’s so beautiful,” he said. “It reminds you of the fascination you had with things and how you can spend hours just being with someone. It’s amazing.”

The couple have both commented that spending as much time together is what keeps their familial bond strong. “It makes it harder to leave and go to work,” Hemsworth said. “I enjoy being at home a lot more than I ever have.”

“You have to make an effort and try to stay together as much as you can,” Pataky said in an interview of keeping her family together. “If we start splitting and doing other things, it’s not going to last. We try and keep it as normal as much as we can, like a typical family.”

Sounds like these two are well-equipped to protect and nurture their family. Congrats!