President Obama visited The Ellen Show and had a bone to pick with the show’s host. Turns out he isn’t too excited about the breaking of his Twitter record. 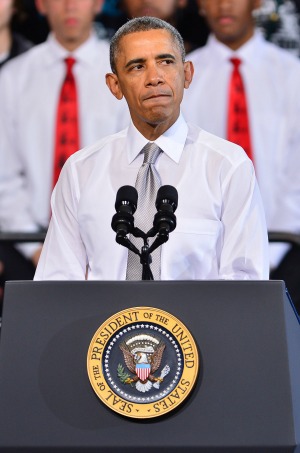 Ellen DeGeneres had a very special guest join her eponymous show from the “Ellen Blue Room” at the White House for an interview that aired Thursday. Barack Obama was live via satellite to discuss Obamacare, but the presidential remote interview wasn’t all shaking hands and kissing babies. It seems Mr. President has a beef with the dancing talk show host: He’s not too happy about his Twitter retweet record being shattered.

Music review: Could this be the worst song ever? The Chainsmokers’ “#Selfie” >>

After exchanging pleasantries, DeGeneres went right for the jugular. “I don’t know if you know this, but I was aiming to break your record of retweets, and I apologize for doing it,” she said. “But I broke your retweet record.”

“I heard about that,” Obama responded. “I thought it was a pretty cheap stunt myself. Getting a bunch of celebrities in the background. Feeding them pizza.”

Of course, DeGeneres and Obama are referring to the most-epic group selfie ever taken. It was snapped at the Oscars and currently holds the record for most retweets at 3,404,460. It also crashed Twitter’s server the night of the Academy Awards.

If only Bradley's arm was longer. Best photo ever. #oscars pic.twitter.com/C9U5NOtGap

Previous to the picture — featuring the likes of Jared Leto, Bradley Cooper and Jennifer Lawrence — being posted, Mr. President himself held the record for most retweets for a sweet photo of him hugging his wife, Michelle, after he was elected to a second term. And thus the bitterness.

Obama’s been on a talk show tear lately to promote Obamacare. Just less than two weeks ago, he made a hilarious appearance on Between Two Ferns with Zach Galifianakis in an attempt to bring awareness of health insurance to a younger demographic.

The POTUS also took time to talk about picking up presidential doggy doo-doo, shopping at the Gap and what he would do if either of his daughters ever got a tattoo. Check out the video below.