This is a classic Throwback Thursday video clip. Watch Candace Cameron Bure and Danica McKellar dance it out in a ’90s TV movie. 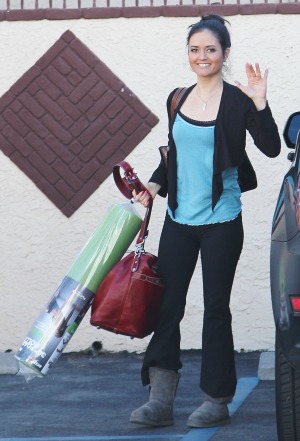 They may be battling it out on the dance floor on Season 18 of Dancing With the Stars, but Candace Cameron Bure and Danica McKellar have already danced together. The two former child actors shared screen time in a 1990 TV movie called Camp Cucamonga.

The duo played rivals at the summer camp. In the movie, they are preparing for a big performance and it is McKellar who has to teach Bure how to hip-hop for the group number. The Wonder Years star is so good that she winds up replacing the Full House star in the dance. Such teen drama!

The young actors aren’t the only familiar faces in the clip. Josh Saviano from The Wonder Years, Chad Allen from My Two Dads and Jaleel White from Family Matters also star in the movie.

The most surprising cameo, though, goes to Jennifer Aniston, who plays a camp counselor. It was shot four years before her career-defining role as Rachel in Friends.

Candace Cameron Bure lets her husband be the boss >>

The dance competition show has set up a story line of two classic ’90s TV stars competing against each other. Who will win — DJ Tanner or Winnie Cooper?

Tune in on Mondays on ABC to see the battle of the former child stars.

6 hrs ago
by Araceli Cruz