There’s no Olympic gold finish for Johnny Weir and his husband, Victor Voronov. The couple announced their split on Wednesday. 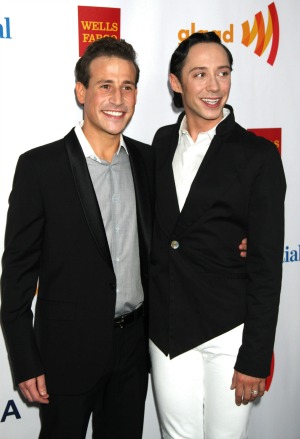 In a not-so-surprising move, former Olympian Johnny Weir has separated from his husband, Victor Voronov. The two were in court earlier this month while the figure skater faced domestic abuse charges. He was accused of biting his husband during a domestic dispute.

The couple showed a united front during their court date. While Voronov asked the judge to dismiss the charges and his wishes were granted by the court, it appears the couple couldn’t mend broken fences.

Weir hinted at trouble late on Tuesday night on his Twitter account and then removed the tweet overnight. However, he officially announced the news on Wednesday.

The couple married in a New York civil ceremony in late 2011. At the time, the NBC commentator called it “the greatest moment in my life.”

The 29-year-old athlete and his Sochi Winter Olympics co-host, Tara Lipinski, became a sensation for their sassy style in fashion and sports announcing. Their work at the Winter Games led to a gig at the Oscars with Access Hollywood in early March.

With Weir’s star rising, it appears that he could no longer make the marriage work. While the former figure skater took to social media to talk about the split, Voronov placed his Twitter account under lock and key. It was formerly a public account.

Weir, who formally hyphenated his last name as Weir-Voronov, has already changed the account back to just Weir.