Lily Tomlin and Jane Fonda are teaming up again, this time on the small screen. Grace and Frankie is the newest creation by Netlflix. 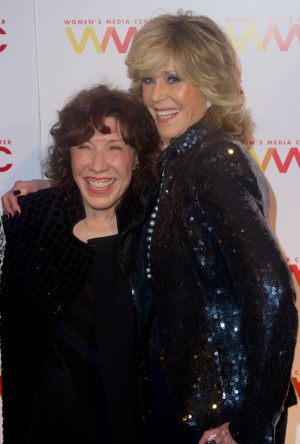 When Netflix announced they were producing their own series, no one knew what to think. But with immense success from both Orange Is the New Black and House of Cards, they are betting on their next creation. And, like the first two shows, they are doing it the right way.

The streaming and rental service announced their newest creation, Grace and Frankie, starring 9 to 5 co-stars Lily Tomlin and Jane Fonda.

According to the Los Angeles Times, the series will follow the two women in their “twilight years”, who become friends after their respective husbands announce their love for each other.

“The women find their lives both turned upside down and to their dismay, permanently intertwined,” Netflix said in a statement. “Eventually, to their surprise, they find they have each other.”

Netflix’s two current series couldn’t be more different, and Grace and Frankie will also go in a very different direction. The hiring of the two iconic stars could make this series a hit.

Jane Fonda tweeted her excitement over the news on Wednesday.

10 Shows to binge-watch on Netflix >>

“Jane Fonda and Lily Tomlin are among the funniest and most formidable actresses ever and it’s an incredible privilege to give them the opportunity to run riot on Netflix,” Ted Sarandos, Netflix chief content officer, told the Los Angeles Times. “The show created for them by Marta and Howard is warm, very funny and anything but wholesome. We can’t wait.”

House of Cards Season 2 returned on Feb. 14 and was a hit with both old and new fans. Orange Is the New Black will return for Season 2 on June 6.

Netflix has ordered 13 half-hour episodes of Grace and Frankie, which is expected to premiere in 2015.