She’s the “Queen of All Media,” so it’s time for her to take on the beverage world. Oprah Winfrey has her own chai tea at Starbucks!

Related story Oprah’s Favorite Barefoot Dreams Is Having a Major Sale on CozyChic Sweaters, Loungewear & More Up to 75% Off 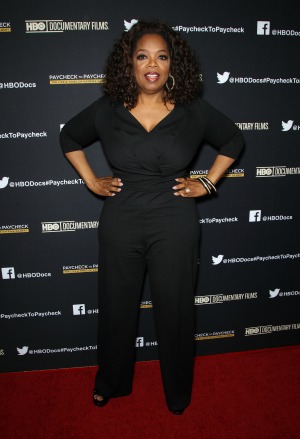 Oprah has conquered pretty much everything in the entertainment world, from her talk show to film, so it was only a matter of time before she took on another endeavor. On Wednesday, it was announced that Winfrey would team up with coffee behemoth, Starbucks, to sell a line of tea.

The news was revealed during the annual shareholders’ meeting, where the 60-year-old talked about working with “teologists” to make a delicious blend of chai tea to sell under her name.

She shared, “I think we got it right.”

The blend will be called Oprah Chai Tea and it will be sold in Starbucks and Teavana stores beginning April 29. Proceeds from the sales will go to youth education, including her South African-based Oprah Winfrey Leadership Academy for Girls.

The partnership came about because the media mogul interviewed Starbucks CEO Howard Schultz for her Super Soul Sunday series on OWN last year. They bonded over their mutual love for coffee and tea.

She told the audience, “Savory and spicy chai, with its deep flavor, has long been a favorite of mine. When Howard Schultz offered to have me come into the Starbucks tasting room and create my very own tea blend, I thought that sounded like such a unique opportunity and fun to the tenth power.”

She also gave her stamp of approval to the coffee giant.

The network head said, “Starbucks is not just a coffee company… it’s about nurturing the human spirit.”

Like everything Winfrey touches, we are sure this is bound to be a successful venture.