From emotions and geography to spectacular inventions, everything in Da Vinci’s Demons is getting bigger for Season 2. We talked with the cast to get the spoilers for the upcoming season. 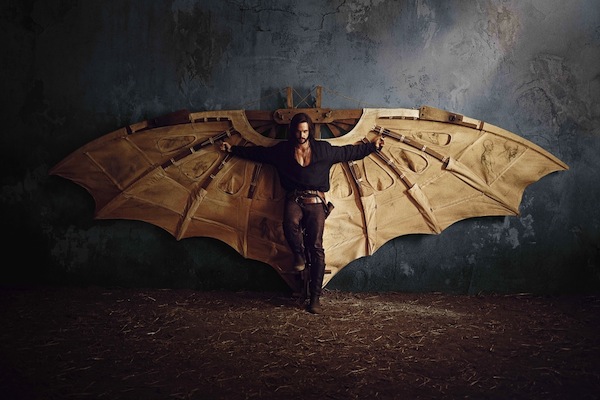 Season 2 of Da Vinci’s Demons returns tomorrow with a new direction for the show. More specifically, an overseas direction.

“It’s so much bigger, the second season, like geographically and emotionally,” Tom Riley, who stars as Leonardo da Vinci, told us during an interview. “We leave Italy. Not all the characters, some stay. We go to the new world. We meet the Inca Empire.”

Executive producer David S. Goyer told us bigger adventures were always a part of the plan for the show.

“In the second season, the tone has coalesced. It [the show] knows what it is,” Riley agreed.

The actor has impressed audiences with the way he walks a fine line between genius and insanity with his portrayal of da Vinci, and Riley said that will continue into Season 2 though we’ll see a shift toward levelheadedness now that he’s thrust into a completely foreign land.

“He’s always been allowed to be a bit mad because people have let it be. He’s been very comfortable with where he is so he can behave badly. In Season 2, he doesn’t know where he is or what he’s doing or why he’s with these crazy Peruvians in this crazy place, so he’s no longer the smartest man in the room.”

“He won’t lose his mind quite as much as in the first season,” Riley added.

Aside from the setting, the inventions are also getting more spectacular.

Goyer told us the show sticks closely to actual inventions da Vinci devised but does take a few creative liberties, which will continue into Season 2.

“We took two of da Vinci’s inventions and combined them into one in Episode 7,” Goyer explained. “This thing that we’re calling the Scorpion Cart. He had built something that was like a self-propelled cart sort of like the Renaissance version of one of those bomb-hunting robots in Iraq.”

The show used that invention, along with another that da Vinci himself called the Scorpion Tail, to create the machine we’ll see in Episode 7, though we’ll have to watch to see how Leo uses the tool.

Da Vinci won’t be the only one with a new adventure either; Lucrezia has a quest of her own.

“She’s desperately trying to avenge something that happened to her 10 years before when we meet her when she’s 17,” Laura Haddock told us of Lucrezia’s direction in Season 2.

We’re also going to get a more detailed history of Lucrezia, according to Haddock. “You’re going to see her [through flashbacks] go through something that nobody should ever have to go through, and it gives you lots of answers as to why she is the way that she is. She’s desperately trying to find some sort of peace and put it to rest and avenge this thing from her past.”

Throughout these quests during Season 2, multiple new characters will be introduced to the show. Goyer said we can expect to see Ima, the Inca high priestess, King Ferrante of Naples and his son Alfonso, and Bayezid of the Ottoman Empire.

“We’ve heard about the Turks, the Ottomans, in Season 1,” Goyer told us, “but we’re going to start to see them because they were a big encroaching threat at that time. We’re starting to open up that [story line].”

In addition to all those new faces, the show is also introducing Amerigo Vespucci, the namesake of America, and Carlo de’ Medici, who is the illegitimate son of Cosimo de’ Medici.

While the show is getting quite a few new characters this season, it remains to be seen how long each will stick around.

Goyer gave us an especially curious sentence to ponder over: “Just because a character gets killed off doesn’t mean you won’t see them again.”

We have a feeling that statement has something to do with that mysterious Book of Leaves.

What are you looking forward to seeing in Season 2 of Da Vinci’s Demons?