When Joshua Fields Millburn was a successful businessman, he referred to his life as one big unhappy accident. 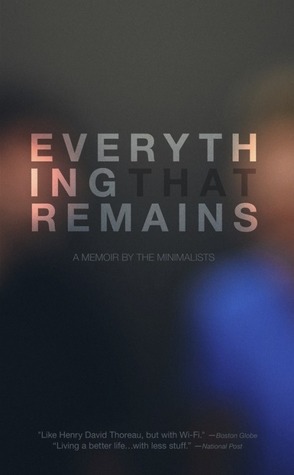 We are where we are because we wandered here — and that was the big problem in Josh’s life. His best friend since fifth grade, Ryan Nicodemus, felt the same sense of confusion. At age 28, they had everything. They had become the American Dream, and they hated it.

Both boys grew up in dysfunctional families where money was not a luxury but a constant concern. Their life plan: don’t be poor. Have enough money to be happy. It started out at 50 grand a year, then six figures. They had stuff that other people envied, and they were miserable. They wondered what went wrong. In the immortal words of the Talking Heads, “How did I get here?”

“Once I got everything I ever wanted, I realized that wasn’t happiness,” says Ryan. “I had debt and stress and anxiety. I was working sometimes 80 hours a week. Instead of bringing me joy, I had depression and misery.”

Josh first heard about minimalism online. Colin Wright was a 24-year-old writer who lived out of a backpack. He traveled the world and followed his passion. Although Josh wasn’t willing to go that far, he realized there was a whole community of people — different backgrounds, different stories — and they all had one thing in common: they were minimalists, and they lived lives of intent and purpose.

At work, Josh was given an assignment. At the time, he managed 150 retail stores, and his bosses wanted him to downsize (aka “fire people”). He put together a list of employees to cut, and his name was top of the list. He walked away from corporate America and gave away one material possession a day for one month. Ryan had a “packing party.” He packed up his things as if he was moving and then, slowly opened boxes of things he needed. After three weeks, 80 percent of the boxes were still unopened. He considers this his lightbulb moment.

Like superheroes rising from the mist, The Minimalists were born.

Ryan’s mom was curious. She asked, “Can’t I buy you things anymore?” He said she could spend time with him instead. Her time, her love, was much more worthwhile than a pair of cufflinks he would never wear. He said, “Let’s have experiences instead of cufflinks.”

Their first book, Minimalism: Live a Meaningful Life, was a how-to. Their new release, Everything That Remains, is a why-to. “It’s important to tell our story — our recipe,” Ryan says. “People can tweeze out different ingredients and apply them to their lives.”

Josh and Ryan aren’t preachers. They’re not poo-pooing the American Dream. They merely believe the American Dream is not for everyone. A big house, a fancy car and expensive gadgets can bring joy in the short run, but as the Minimalists can attest, you are not your paycheck.

“There’s a line hidden on the copyright page,” Josh says. “‘Love people; use things. The opposite doesn’t work.’ It’s not just about decluttering your life. That’s the first step. It’s about clearing the clutter to make room for the people in your life, the important things in your life.”

What remains when you get rid of your stuff? According to Josh, “Health, relationships, cultivating a passion. Growth and contribution. Being able to contribute beyond myself.” But the boys aren’t saying minimalism is easy.

The hardest thing for Ryan to give up was his identity. By accident, he had become his new car, his expensive bar tab and his fancy vacations. When people asked him, “What do you do?” his first response was his job, because at least then, people could understand him from a socioeconomic perspective.

Everything That Remains is a memoir, of sorts. It’s a map for seekers pursuing a different path. This isn’t an instruction manual. It feels like a novel. It is entertaining, filled with artful imagery and tragicomedy that makes you unsure whether to laugh or cry at the unfortunate (honest) state of things. Because let’s face it: our belongings are only things.

“If I walked outside and my apartment spontaneously combusted, what would I run back in there for? Nothing,” Ryan says.

The Minimalists may have gotten rid of their stuff. They only own things that serve a purpose or bring them joy, but there is nothing minimal about their passion for life, love and service. Being a minimalist means getting rid of your crap but gaining so much more.

More on living life with purpose

10 Weird ways to reduce stress
Can your diet lead to inner peace?
What clutter is doing to your health