Da Vinci’s Demons star Tom Riley told us love is taking a backseat for da Vinci in Season 2, but that doesn’t mean there aren’t a few dalliances. 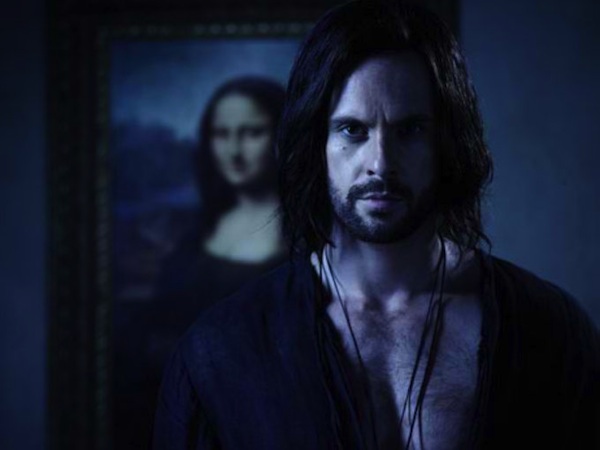 After a mind-blowing, cliff-hanging ending to Season 1, Da Vinci’s Demons‘ return for Season 2 will see quite a few changes to the characters we know and love. No, we’re not just talking about Tom Riley‘s handsomely disheveled new hairdo.

In our interview with Riley and actress Laura Haddock, who plays Lucrezia, the two told us da Vinci would be heading off for quite the adventure in the upcoming season while Lucrezia stayed behind with a quest of her own.

Tom Riley dishes on da Vinci and his inner demons >>

“If we were together all Season 2, it might be a bit boring, wouldn’t it?” Laura Haddock said, laughing when we asked her about the impending split.

The actress also recounted her reaction when she discovered the plans for Season 2. “I remember reading the scripts and thinking ‘Oh no! They get split up!’ They don’t see each other as much as in Season 1. And then someone said to me, ‘Don’t you remember Ross and Rachel in Friends?’ And I was like, ‘Oh yeah, they split up! Oh that actually worked.’ Because then you spend Season 3 thinking, ‘Oh I can’t wait for Ross and Rachel to get back together or be in the same room again.'”

Haddock made no promises that the relationship between Lucrezia and da Vinci would follow the same pattern as Ross and Rachel’s on Friends, but we have a suspicion those two are far from over.

Lucrezia may not be joining da Vinci on his big adventure in Season 2, but Zoroaster will. They’re headed to the Inca Empire where things are bound to get interesting, especially in regard to the relationship between da Vinci and Zoroaster.

Tom Riley explained, “Greg [Chillin, who plays Zoroaster] and I have always thought long and hard about why those two are together. What’s in it for either of them? It’s a pain to have to deal with this stuff with da Vinci. But he still hangs around. He doesn’t get paid. He does it for free, and Leonardo treats him badly but won’t leave him alone and will save him against any odds, so we just thought there must be something. Something happened with those guys.”

If you’ll remember, last season the show put da Vinci at the heart of a sodomy trial and toyed with the idea of da Vinci’s sexuality. While the show isn’t backing away from that topic this season, Riley explained it won’t be at the forefront of the plot.

“I think that’s always there. For me personally, there are moments that I try and weave in to just show that he’s very fluid and interested in everyone and everything of every sex, but there is no real love story for Leonardo in Season 2. There [are] dalliances. And the Lucrezia stuff still plays very strongly from Season 1.”