Jennifer Lawrence gets down and plays air guitar to Santana’s “Evil Ways” in an intense deleted American Hustle scene. 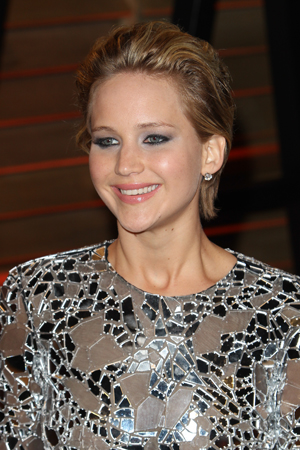 In a deleted scene from American Hustle, Jennifer Lawrence gets down and plays air guitar to Santana’s “Evil Ways” in an intense lip-synching sequence as she attempts to do some housework.

In the movie, Lawrence busted a move to Paul McCartney’s “Live and Let Die” while cleaning the house with her yellow gloves while angry at her character’s husband. Now, on a DVD bonus feature, fans can get more of the actress’s talented domestic pretend-singing with this awesome deleted scene.

Say it ain’t so! Jennifer Lawrence reveals she needs a break from filming >>

Sporting a super-unflattering leopard-print muumuu, Lawrence begins by slowly moving a vacuum cleaner and singing to Santana’s legendary tune. As her small boy watches stoically from the couch, Lawrence increasingly gets into it and starts breaking out in some awkward and wild moves.

Toward the end of her performance, Lawrence completely forgets her cleaning duties and goes into full-on dance mode, kneeling on the floor and playing a very mean air guitar.

Adding to the already wildly fantastic scene, Lawrence finishes off her house look by wearing scruffy old sandals with short sheer stockings and a messy bun on top of her head.

This scene does a perfect job at depicting Lawrence’s character as con artist Irving Rosenfeld’s wife, Rosalyn. The eccentric mother and housewife is unpredictable and totally over-the-top and this scene nails Rosalyn down perfectly.

As the crazy mobster’s wife, Lawrence’s character brought great comic relief to the film, portrayed a strong, but complicated woman and provided another sampling of her excellent acting skills.

You can watch Lawrence get down and crazy in her living room in the full deleted scene video below.