M.I.A. gave a memorable halftime performance at the 2012 Super Bowl alongside Madonna. But perhaps it was memorable for all the wrong reasons — the rapper is now facing a $16 million lawsuit from the NFL. 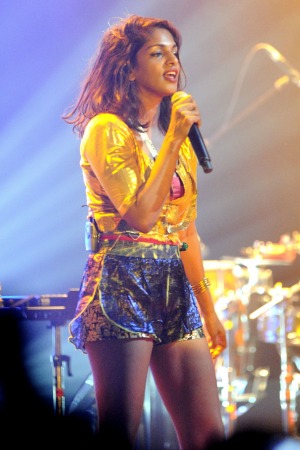 Mathangi “Maya” Arulpragasam, better known by her stage name M.I.A., has come under fire from the National Football League for her 2012 Super Bowl performance with the Queen of Pop, Madonna —  in which the rapper famously gave a middle finger salute.

The NFL has responded to that middle finger salute with one of its own — a $16 million lawsuit.

According to The Hollywood Reporter, the NFL’s lawsuit is asking the “Paper Planes” hit maker for $15.1 million in ”restitution,” and it is after even more money for breach of contract, another $1.5 million. Yikes!

M.I.A. decided to take to Twitter on Monday and ask Madonna for financial assistance, perhaps in jest or perhaps in desperation. The British rapper wrote, ”ummm ….. can i borrow 16 million ? (sic)”

The lawsuit has been ongoing since the 2012 halftime performance of “Give Me All Your Luvin'”, but according to The Hollywood Reporter, the NFL is getting tired of waiting for the money and have decided to get the American Arbitration Association involved as of March 14.

So why is the NFL so hell-bent on getting so much money?

Well, apparently it feels it is owed for not only the breach of contract but also additional restitution for “the alleged value of public exposure she received by appearing for an approximately two minute segment during Madonna’s performance. The figure is based on what advertisers would have paid for ads during this time.”

However, according to E! News, the rapper’s reps have responded to the NFL’s claim, saying it “lacks any basis in law, fact, or logic.” They add that the “continued pursuit of this proceeding is transparently an exercise by the NFL intended solely to bully and make an example of Respondents for daring to challenge NFL.”

Tell us: Is the NFL trying to make M.I.A. a scapegoat or does she deserve the backlash she’s receiving?