Former soccer star David Beckham has impressed the fashion world with his underwear campaigns (he’s impressed the rest of us, too) and he’s just been named Underwear Model of the Century by designer Tommy Hilfiger. 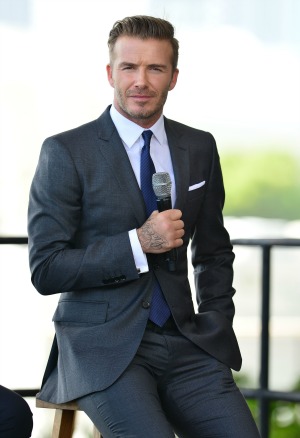 It may be a little early in the century to be naming the greatest underwear model, however, there is one candidate that is just so amazing he deserves the title right now.

David Beckham has been named Underwear Model of the Century by Tommy Hilfiger, and it’s a title he has certainly earned.

The designer sang the soccer star’s praises to TMZ. “I have seen all kinds of underwear models, but we all wish we looked like David Beckham at the end of the day,” Hilfiger said. “He’s like the Underwear Model of the Century!”

And we’re pretty sure women across the globe agree with that statement. The L.A. Galaxy star has already shown off his incredibly toned body for multiple fashion campaigns (he started in 2007).

Beckham has produced some of the most memorable underwear ads for fashion houses like H&M (remember the tantalizing 2014 Super Bowl ad?), Armani and his own self-titled line of underwear. Not to mention, he has appeared in many prestigious fashion magazines, including Elle and the Got Milk campaigns, dressed in very little.

Appearing on massive billboards around the world is not just a job for Beckham — the sportsman is passionate about the fashion industry and was pleased to launch his own underwear line several years ago.

“I have had the idea of doing a bodywear collection for some time now. The push to do something of my own really came as a result of my collaboration with Armani,” he revealed to WWD magazine in 2012.

“It proved to me that there is a real market for good-looking, well-made men’s bodywear,” he continued.

“I can’t wait to show people the collection — although I’m not sure my mum will be too happy seeing a billboard image of me in underwear again,” Beckham joked.

Well, the star’s mom has since had to see him in several more underwear campaigns, although, we’re not complaining. Victoria Beckham, we envy you!

Tell us: Does David Beckham deserve the title of Underwear Model of the Century? We think so.