Pretty Little Liars spilled all the dirty (pun intended) details about that last night when Ali disappeared. We have four revelations from tonight’s insane season finale. 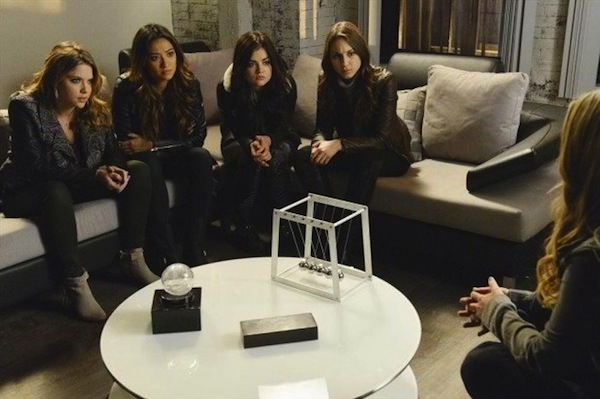 Let’s be honest. When we heard the season finale of Pretty Little Liars tonight was going to give us all these explosive answers, we were skeptical. After all, it’s not like we haven’t heard that line before and ended up feeling sorely disappointed when we discovered things weren’t as they seemed.

Tonight, we aren’t let down, per se. The finale is, after all, not to be missed. Especially the last five minutes. Still, we were hoping for more present day answers while the episode focused more on the past and the night Ali disappeared. But we finally have all of the pieces of that puzzle so we can move on, and we’re satisfied with that. She’s aliiiive!

Is a Pretty Little Liars star walking down the aisle? >>

Revelation #1: Ali pushed Ian and saved Hanna at the cabin

While Ali may have faked her death and hid in the shadows, she’s still had the liars’ backs, acting as a sort of twisted guardian angel.

Ali discovered Spencer’s (Troian Bellisario) pill problem that night and sent her back to bed. Spencer fell asleep following her argument with Alison and didn’t leave the barn again. She’s not guilty of hurting Alison, even though her parents think she’s behind the death. Well, until Melissa spills a secret to daddy dearest, that is. Does she confess who the real killer is?

Thinking she was dead, Jessica DiLaurentis buried Alison in the backyard after she witnesses someone hitting Ali over the head with a rock. She’s trying to protect someone she cared about enough to allow her daughter’s murder to go unpunished.

As any Prince Charming would, Ezra swoops back into Rosewood just in time to find the girl and save the day. Who knows how he got past the police, how he knew where to find the girl or why he thought wearing a baseball cap would make him seem incognito but, well, we’ve discovered there are some plot points in Pretty Little Liars you just can’t harp on. Point is, he’s vindicated.

That leads us to the events at the end of the episode. SPOILER ALERT: Ian Harding, who plays Ezra, told us he signed his contract for Season 5, which means Ezra will be returning. Hopefully (please, please, please), it won’t only be through flashbacks. We think it’s highly unlikely he won’t survive the gunshot. He and Aria have to reconcile, after all.

In the final moments of the show, we see Mrs. DiLaurentis’ unmoving body being dragged to an open grave in the dirt. At first, we thought it was a flashback, but Mrs. D is wearing the clothes she had on in the present. So what gives? Is she dead or is A giving her a taste of her own medicine since she unknowingly buried her daughter alive?

Here’s our theory: Jason is A, and big brother is really, really messed up in the head. It would explain why he lied about being in rehab and why Mrs. D covered the crime. It would also explain the Hastings’ involvement since Jason is technically a Hastings.

What did you think of the Season 4 finale? Who do you think is most likely A?