Justin Bieber’s skateboard is, apparently, to blame for causing him to appear to be under the influence during his arrest in January. Watch video of his tottering walk here and judge for yourself. 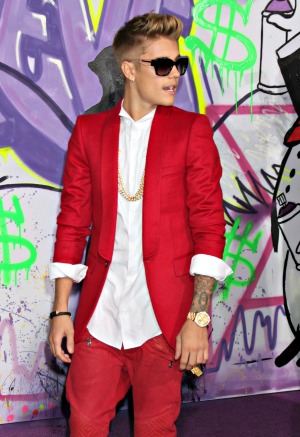 Justin Bieber is now claiming his busted foot is to blame for his wobbly attempt at walking in a straight line for police.

The troubled singer, who was arrested in Miami Beach in January on suspicion of driving under the influence, driving with an expired license and resisting arrest without violence, now says a skateboarding injury — not booze or drugs — was to blame for his shaky performance.

According to freshly released documents, 20-year-old Bieber told cops he had a hairline fracture on his right foot that was caused by a skateboarding accident three months earlier. He also took a bratty attitude with police during his arrest, bragging about his wealth.

After the officer remarked he wasn’t driving around in a Lamborghini at that age, Bieber fired back, “Yeah, well, I bet you didn’t have millions of dollars in your bank account either.”

Justin Bieber and Selena Gomez get steamy on the dance floor >>

For the record, Justin Bieber’s net worth is said to be somewhere around $130 million, so despite that being an incredibly sassy comment, it wasn’t a lie.

A toxicology report revealed that the sometimes boyfriend of Selena Gomez had THC (a component in marijuana) and the anti-anxiety medication Xanax in his system at the time of his arrest, but not alcohol. He has plead not guilty to the charges.

Take a look a his unsteady heel-to-toe sobriety test here:

Tell us: Are you buying Justin Bieber’s hairline fracture explanation?