Everyone is safe, but there were a few scary moments last night when one of Miley Cyrus’ tour buses caught fire. See the video. 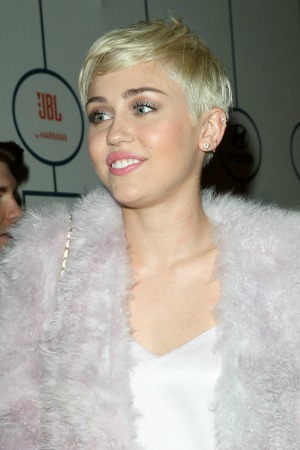 Miley Cyrus is known for making quite a scene onstage, but last night it was her tour bus that commanded all of the attention. The 21-year-old singer and her group were on their way from Houston, Texas, to her next tour stop in New Orleans, Louisiana, when her bus caught fire.

The tour bus was carrying both Miley’s mom, Tish, and her younger sister, Noah. According to TMZ, the fire was caused by an exploding tire. Everyone on the bus escaped without injury.

It was 14-year-old Noah who spread the news about the bus mishap when she captured a short video on her Instagram account.

She captioned the clip, “Bus down!”

Noah also shared photos of the interior of the bus in the aftermath of the fire. The entire bus and its contents were destroyed.

https://instagram.com/p/lrQ4OoINnS
The picture shows wires hanging down in the charred interior. The bus had to be a total loss after such devastation.

Is Miley Cyrus a scapegoat for pop? Kylie Minogue thinks so! >>

https://instagram.com/p/lrP3xEoNmx
Miley’s manager, Larry Rudolph, also narrated a clip where he shares the aftermath of the fire. He said, “This is the bus we are riding on… was the bus we were riding. I don’t think it’s a bus anymore.”

https://instagram.com/p/lrPp2jINmp
The “Wrecking Ball” singer’s Bangerz tour will continue as planned tonight in New Orleans, as Noah reassured all of her fans on Twitter.