It’s going to be a hot night in Vegas for country music. The Academy of Country Music released the names of musicians performing at the show in April. 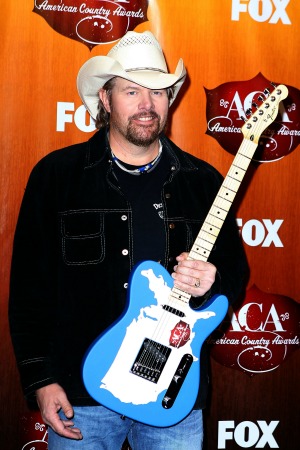 The 49th Annual Academy of Country Music Awards are less than a month away. The ceremony is slated to air live from Las Vegas on Sunday, April 16 with hosts Luke Bryan and Blake Shelton.

On Tuesday, the Academy of Country Music and Dick Clark Productions announced a few high-wattage performers who will sing at the award show. Eric Church, Toby Keith and Lady Antebellum, with special guest Stevie Nicks, were the big names added to the roster today.

Previously announced performers include Jason Aldean, Luke Bryan, Miranda Lambert and Shelton. Also on that list are George Strait, Keith Urban, Florida Georgia Line and The Band Perry, so it’s guaranteed to be a huge night for the country music industry.

In an April 2 update, even more incredible performers were added to that list. Dierks Bentley with Sheryl Crow, Lee Brice, Tim McGraw, Brad Paisley, Darius Rucker and Rascal Flatts are now all late additions to the country music roster for the show. Shakira, Brett Eldredge and Hunter Hayes will also be performing.

The show began in 1966 and is unique because it focuses on its charitable organization, Lifting Lives. The Academy describes it as “the charitable arm of the Academy of Country Music dedicated to improving lives through the power of music. With the help of country music artists, the music industry and other caring supporters, the Academy is able to give back by funding a variety of amazing organizations that are music-focused.”

Country music awards 101: How are they different? >>

The nominees’ names were released in late January and two country superstars lead the pack, with Lambert and Tim McGraw racking up the most honors. Fans were also able to help choose the Entertainer of the Year and New Artist of the Year nominees through an online vote.

The show will be broadcast live on CBS for East Coast viewers from the MGM Grand Garden Arena.