Georgia May Jagger, who is grief-stricken after learning of the death of her father’s girlfriend, L’Wren Scott, has canceled her runway appearances to be with her family. 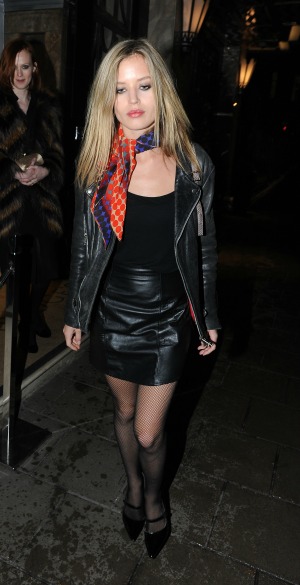 The world has been rocked by the tragic news of L’Wren Scott’s death, and Mick Jagger and his daughter Georgia May — whom he shares with Jerry Hall — are completely devastated.

The 22-year-old model’s career has been going from strength to strength, and she was scheduled to make a runway appearance at Virgin Australian Melbourne Fashion Festival for local designer Camilla Franks this week.

However, according to the Daily Mail, after the model found out about the death of her father’s girlfriend yesterday, she canceled all shows and flew back to New York City, New York, to be with her family.

Camilla Franks’ reps have released a statement explaining why one of their top models would sadly no longer be a part of the Camilla Grand Showcase.

The statement read, ”In light of the recent sad news, Georgia May Jagger will not be participating in Virgin Australia Melbourne Fashion Festival for the Camilla Grand Showcase. We ask that you respect Ms. Jagger and her family’s privacy at this very difficult time.”

”On behalf of the Festival and the Camilla team we offer our sincere condolences to Ms. Jagger and her family.”

Apparently, Georgia May was close to the 47-year-old designer, and the pair were often spotted attending events together. As early as September, the model and her father were seen sitting with Scott in the front row and enjoying her Spring Summer 2014 show at London Fashion Week.

Georgia May is not the only Jagger family member to have canceled an appearance either — her heartbroken father also has called off his Australian gig with The Rolling Stones in Perth.

Our thoughts are with the family and friends of Scott at this sad time.