It turns out that Jason Aldean’s momentary indiscretion with American Idol alum Brittany Kerr has turned into a relationship. That’s right — the pair are reportedly dating. 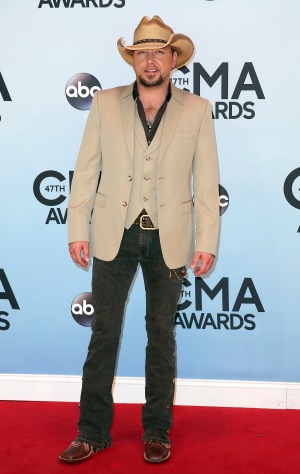 Jason Aldean made headlines when pictures surfaced of him and American Idol Season 11 contestant Brittany Kerr engaged in a steamy extramarital smooch back in September 2012.

Aldean is known to be a bit of a bad boy, and his rep finally became too much for his wife and childhood sweetheart Jessica Ussery.

The former couple decided to call it quits and split up in April 2013, but it appears that Aldean and Kerr’s kiss may have meant much more than just a drunken grope at a bar in West Hollywood, California, because now the pair are apparently dating!

According to Us Weekly, the country crooner has been dating the cheerleader since he filed for divorce from his wife of nearly 12 years with whom he shares two daughters.

At the time of his indiscretion, Aldean apologized to his wife and his fans via Facebook, saying, “I had too much to drink, let the party get out of hand and acted inappropriately at a bar.”

“I left alone, caught the bus to our next show and that’s the end of the story,” Aldean added.

Although, as it turns out, it’s not the end of the story. Kerr and the “Dirt Road Anthem” hit maker must have some serious chemistry if they are willing to try and make their romance work despite the backlash they are sure to receive given that she rocked and potentially destroyed his marriage.

At the time of his divorce, Aldean revealed to Us Weekly in a statement that the entire family was going through a hard time.

“Jessica and I have been together since we were teenagers. We’ve been through a lot of ups and downs over the years as we grew up together as a couple.”

“She will always be important to me because she is the mother of my children, and I know that we will both always make our daughters our No. 1 priority,” the singer said.

Tell us: Will Jason Aldean and Brittany Kerr’s romance last?