Johnny Depp and Amber Heard celebrated their star-studded engagement party on Friday night, and according to Steven Tyler, it was a beautiful affair. But did he think Depp’s mother was even more beautiful? 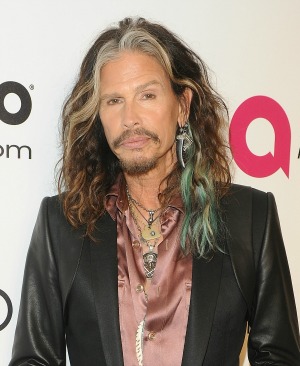 The news of Johnny Depp and Amber Heard’s engagement has received mixed reviews from fans and celebrities.

However, the couple are clearly smitten with each other, and if no one else is pleased for them, then Steven Tyler is.

According to Entertainment Wise, the loved-up pair — who met on the set of the 2011 movie The Rum Diary — celebrated their engagement party in downtown Los Angeles, California, on Friday night at the Carondelet House (a beautiful Italian-themed villa that was built in the 1920s).

The 3 Days to Kill actress and her beau have remained very hush-hush about their engagement. But according to E! News, a source revealed that the invites to the lavish affair came in a black envelope with the initials “A and J,” and they were accompanied with what appeared to be a golden ticket.

There was no shortage of famous faces in attendance at the couple’s 1920s-themed party. Guests included producer Jerry Bruckheimer, Mandy Moore and Ryan Adams, Marilyn Manson, and rock legend Steven Tyler, who couldn’t be happier about the news of his good friend Depp’s engagement.

Tyler was so pleased, in fact, that he even took the time to gush to a few reporters who were waiting outside the party. “I love that he’s in love,” Tyler said. “We were all dancing and it was beautiful.”

It appears though that Depp’s engagement party was not the only thing Tyler thought was beautiful. He also seems to have a little crush on the The Lone Ranger star’s mother. “Johnny’s mum is the most beautiful woman,” Tyler said.